Aegina island pictures depict the island of Aegina located in the center of the Saronic Gulf, surrounded by Agistri, Methana, Troizina, Poros, and the coasts of mainland Attica is the second-largest island in size, population, and development island of Argosaronic. It is a welcoming island that is only 1 hour and 15 minutes away from Piraeus by ferryboat and only 35 minutes by “flying dolphin.” The municipality of Aegina consists of the island of Aegina and a few offshore islets. It is part of the Islands regional unit, the Attica region. The municipality is subdivided into the following five communities Kypseli, Mesagros, Perdika, Vathy. The capital is the town of Aegina, situated at the northwestern end of the island. Due to its proximity to Athens, it is a popular vacation place during the summer months, with several Athenians owning second houses on the island. 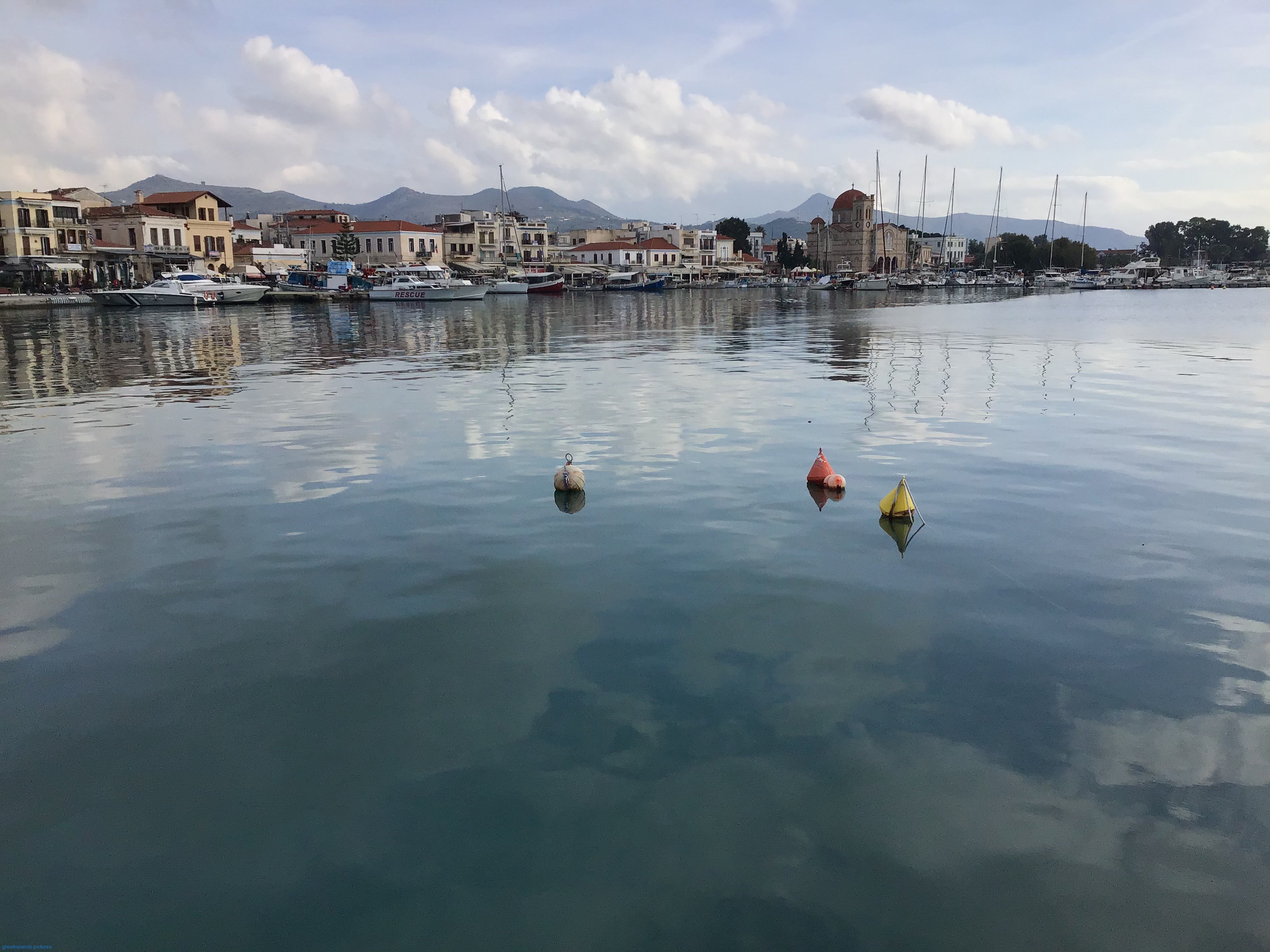 Aegina attracts many people because of its proximity to Athens, making tourism the most important local economic activity in recent decades.  Moreover, religious tourism is increased due to the famous Saint Nektarios Monastery and archaeological tourism due to the Aphaia temple and the Byzantine monuments. A romantic ride with a one-horse carriage in Aegina harbor

The imposing Monastery of Saint Nektarios, along with the oversized holy temple, is about 6 km from the city of Aegina. Saint Nektarios of Aegina  (1 October 1846–8 November 1920, a recent saint of the Greek Orthodox Church) Metropolitan of Pentapolis and Wonderworker of Aegina, was officially recognized as a Saint by the Ecumenical Patriarchate of Constantinople in 1961. His Feast Day is celebrated every year on 9 November. St. Nektarios died on November 8, 1920, at the age of 74. His body was taken to the Holy Trinity Convent, where he was buried by his best friend St Savvas of Kalymnos, who later painted the first icon of St. Nectarios. The funeral of St. Nectarios was attended by multitudes of people from all parts of Greece and Egypt.  The monastery houses the Saint’s grave, while his sacred relics are kept in the church of the monastery. Thousands of pilgrims visited the monastery of Saint Nektarios throughout the year.

Continuing the road to Saint Nektarios,  and a few kilometers further, we meet the hill of Palaiochora, located on the hill behind and sloping from the Monastery of Saint Nektarios. This old city resembles Mistra with many churches and ruins of houses. The Aeginites built Palaiochora to guard against the raids of the Saracens pirates and, for many centuries, became the capital of the island. Οnce had 366 churches (one for each day of the year) and 800 houses. Today, only 38 royal churches are preserved, some of which are in good standing, worth visiting for their history and the frescoes preserved to this day. We mention some of them such as Episkopi – Saint Dionysios (vaulted basilica with magnificent frescoes built into the rock. Here you will see the cell in which he lived for 1576-1579 and the locals’ affectionate inscription of love for Saint Dionysios), Metamorphosis (all the frescoes and iconostasis are preserved) and Saint Kiriaki (double basilica with exquisite frescoes that constituted the center of Palaiochora from the 17th century until 1830).

The metropolis of Aegina is located in the center of Aegina and was built in 1806. It is the first cathedral of Free Greece. It is a church dedicated to the Virgin’s Assumption, Saint Dionysius, and Saint John the Theologian. On January 11, 1828, the Aegean υποδέχτηκαν received the governor of Kapodistrias at the Cathedral, and a few days later, on January 28, the oath of office of Kapodistrias as the first Governor of the Greek State took place. There are many historical relics in the Cathedral, a marble iconostasis, frescoes, wall paintings, and the wooden stables of Governor Ioannis Kapodistrias, which is still preserved across the Despotic Throne.

The Aegina Archaeological Museum is located in Kolona Aegina. It was founded in 1828 or 1829 by Ioannis Kapodistrias, and it is housed in a privately owned building donated by Bavarian archaeologists. It has been housed in Kolona since 1981. It hosts ancient jewelry, pottery, sculpture, coins, weapons, and bronze statues with important vessels. The cape took the name “Kolona” from Venetian sailors, who used the columns of the Doric temple of Apollo as a guide. There successively developed a highly significant fortified Prehistoric settlement at the site, the Archaic-Hellenistic acropolis, the sanctuary of Apollo, and then a Byzantine settlement. Today the building housing the Museum has three rooms, mainly exhibiting findings from the temple of Athena Aphaia, the statue of Hercules, coming from the temple of Apollo, and the Aegina Sphinx, which comes from the same area. (Sanctuary of Apollo in the island of Kolona on the island) and was discovered during excavations in the area of Kolona in 1903. The Museum also represents a pre-Hellenic two-story dwelling, the copper foundry, pottery, archaeological finds from the 7th to the 5th BC. Century, as well as fragments of the pediments of the temples of Athena Aphaia and Apollo.  Also exhibited are vessels from the Cyclades and Crete – an example of the strong trade links between these areas and Aegina – objects of daily life and tools. The Museum is open all year round (in the winter from 08: 30- 15: 00 and in the summer from 09: 00 to 16: 00), and is closed on Monday week.

The Temple of Aphaia is located within a sanctuary complex dedicated to the goddess Aphaia on the Greek island of Aigina, which lies in the Saronic Gulf. Formerly known as the Temple of Jupiter Panhellenius, the great Doric temple is now recognized as dedicated to the mother-goddess Aphaia. It was a favorite of neoclassical and romantic artists such as J. M. W. Turner. It stands on a c. 160 m peak on the eastern side of the island approximately 13 km east by road from the main port. Aphaia was a greek goddess who was worshipped exclusively at this sanctuary. The extant temple of c. 500 BC was built over the remains of an earlier temple of c. 570 BC, which was destroyed by fire c. 510 BC. The elements of this destroyed temple were buried in the infill for the larger, flat terrace of the later temple and are thus well preserved. Abundant traces of paint remain on many of these buried fragments. There may have been another temple in the 7th century BC, also located on the same site, but it is thought to have been much smaller and simpler in terms of both plan and execution. Significant quantities of Late Bronze Age figurines have been discovered at the site, including proportionally large numbers of female figurines (kourotrophoi), indicating – perhaps – that cult activity at the site was continuous from the 14th century BC, suggesting a Minoan connection for the cult. The last temple is an unusual plan and is also significant for its pedimental sculptures, which are thought to illustrate the change from Archaic to Early Classical technique. These sculptures are on display in Munich’s Glyptothek, with several fragments located in the museums at Aegina and on the site itself.

The Temple of Zeus Hellanios, near the village of Pachia Rachi, is a 13th-century Byzantine church built on the ruins of the ancient temple to Zeus Hellanios, built in the 4th century BC. The staircase leading up to the church, some of the original walls, and loose stones from the earlier temple remain.

Historical and Folklore Museum of Aegina

Housed in a neoclassic building of 1828, the donation of Polymnia Irioti. On the first floor, there is the Aeginetian house with antique furniture, paintings, urban traditional costumes, ornaments, manuscripts, documents, and the library of Panagi Irioti. The ground floor houses the Fisherman house, a domed with fishing equipment sponges, diving boats, fishing boat replicas, and the village house with contemporary everyday items, textile items, agricultural tools, and pistachio nut processing equipment.

According to tradition, the tower was built around 1802 by Spyros Markellos, a member of the Greek Parliament and one of Aegina’s leaders during the Greek War of Independence (1821-1829). However, the architectural style of the building could lead to the conclusion that it was, in fact, build around the end of the 17th century forming part of the fortifications erected by Francesco Morozini during the period of the second Venetian occupation of Aegina (1687-1715). In 1826-1827 the tower served as a state building where government meetings were held. During Ioannis Kapodistrias, Aegina was the first capital city of modern Greece (1828-1829). The tower housed the state offices of various members of the Cabinet and the temporary Governor of Aegina Andreas Giannitsis. Dr. Samuel Gridley Howe, the humanitarian doctor who offered his medical services and fought alongside the fighters of the Greek Revolution of 1821.

The famous pistachios of Aegina

In 1896 physician Nicholas Peroglou began the systematic cultivation of pistachio, which soon became popular with the inhabitants of the island. Since the 1950s, pistachio cultivation has largely displaced the rest of the agricultural activity due to its large profits and the phylloxera that threatened the vines. It is estimated that its pistachios cover 29,000 acres while the total production reaches 2,700 tons per year. In the last few years, in mid-September, the Fistiki Fest Festival is organized every year with the name “Fistiki Fest.” So do not miss the famous pistachios of Aegina, either fresh or roasted, whether salted or not used in halva nougat pies or spoon sweets.

Famous beaches of the island are Agia Marina, Marathon, Perdika, and Souvala.  The sandy Agia Marina within 15klm from the port is the most famous and organized beach on the island with beach bars and taverns. It is the busiest spot for Aegina. The crystal waters, the vast sandy beach with the pine forest attract large numbers of tourists. Perdika is a small traditional fishing village with a wonderful view of the little island of Moni. Souvala is a coastal village and port. It is a tourist center of the Aigina thanks to its beautiful beach and medicinal springs. Also, Aiginitissa is a closed bay with eucalyptus trees.  Kolona is the municipal beach of the town.  You can also enjoy swimming in Panagitsa, in the waters of Faros, or on the beaches of Mikros Marathonas and Megalos Marathonas with their shallow and crystal clear waters.     LINKS https://www.lonelyplanet.com/greece/aegina https://www.forbes.com/sites/laurabegleybloom/2018/05/24/best-of-greece-secret-spots-where-the-locals-go/#1bfd3d9d25b7
Please follow and like us: