Corfu is one of the most important islands of Greece in the Ionian Sea, one of the first Greek islands that accommodated mass tourism.   The city of Corfu is characterized by a strong Venetian element and many English and French influences. It is a cosmopolitan city that spreads a sense of nobility.
In Corfu, many Venetian mansions and buildings are painted with the traditional earthy color of the ochre.

Corfu is named the “Queen of the Ionian.”  No matter how many times you visit, you will always have something new to see at the noble Corfu.

A visit to Achilleion Palace with the blossomed gardens around it enchants the visitor. The Achilleion Palace was built during the years 1889-1891 on the top of a wooded hill in the village of Gastouri by the Empress of Austria and Queen of Hungary Elisabeth, also known as Sisi. 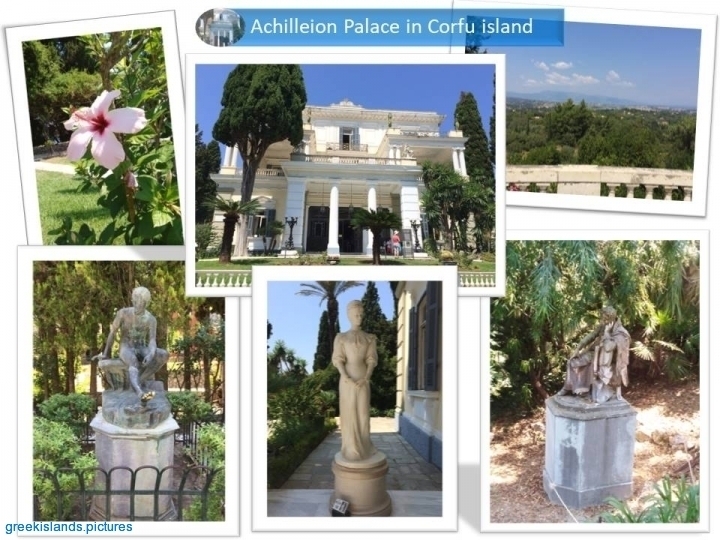 Bottom center: The statue of Sissy- The gardens. Bottom left: “Hermes resting and thoughtful.  It is comprised of sculptures that Elisabeth commissioned from European studios to decorate Achilleion.

The Achilleion was built following the instructions of the Italian architect Raffaele Caritto in Pompeian style. The name of Achilleion was given by the Empress herself because of her great admiration for the hero of Greek mythology, Achilles, whom she considered to combine Greek divine beauty and valor but also tragic fate.

Elisabeth used to visit the Achilleion twice a year until 1898. After her death, the Achilleion remained closed for nine years.  In 1907 was sold to the German Emperor Kaiser Wilheim II, who made several additions and changes to the gardens.

During World War I, the French and the Serbian troops used the Achilleion as a military hospital.  In 1983 the Greek Tourism Organization undertook the management of the palace.

The visitor will see the statues and sculptures that adorn the yard and the exterior of the palace, the extensive terraced gardens, the lush vegetation that surrounds it,  and the breathtaking views.

The Peristyle of the Achilleion is dominated by the nine marble statues of the muses together with the status of Apollo and the three Graces.

In the Peristyle Arcade, known as “Arcade of the Wise men,” thirteen busts of ancient philosophers and Shakespeare are saved.  Through successive wooden doors, the visitor can see the large hall which used to house the Casino.

Entering the palace, the visitor faces the staircase, a priceless work of art, which celebrates Greek mythology, with the status of Zeus and Hera, statuettes, and plaster sculptures.

The statue of Achilles

The statue of “Dying Achilles” is the German sculptor Ernst Gustav Herter, Professor of Sculpture at the Berlin Academy, representing Achilles dying trying to pull the arrow out of his heel.

The statue of “Victorious Achilles,” which was placed in the Achilleion at the Kaiser’s wish, is the largest statue of the Achilleion, representing Achilles at the moment of his victory.

The Chapel of the palace

Empress Elisabeth’s Catholic chapel is a work of art in its entirety. Its most impressive part is the mural on the dome-shaped ceiling depicting the Trial of Jesus.

The Entrance to the palace (4 seasons) 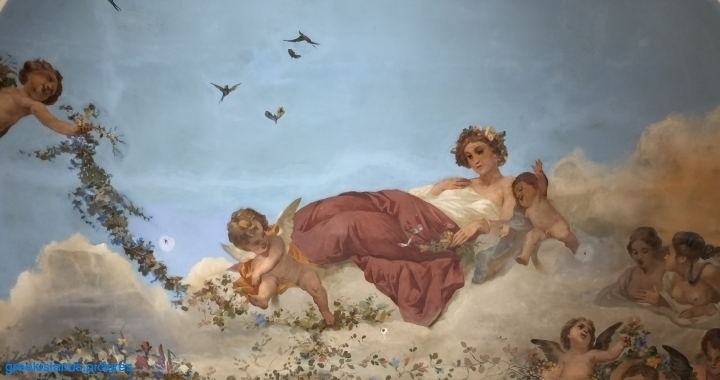 On the second floor, there is a grand oil painting by the Austrian artist Franz Matsch, depicting the Triumph of Achilles in his fight with Hector.

It is one of the most beautiful palaces left behind from the British occupation. The Palace of Saints Michael and George is a palace in the city of Corfu.  The palace was built for Sir Thomas Maitland, the British High Commissioner of the Ionian Islands. It was used as the High Commissioner’s residence but was also used as the seat of the Ionian Senate of the Order of Saints Michael and George. 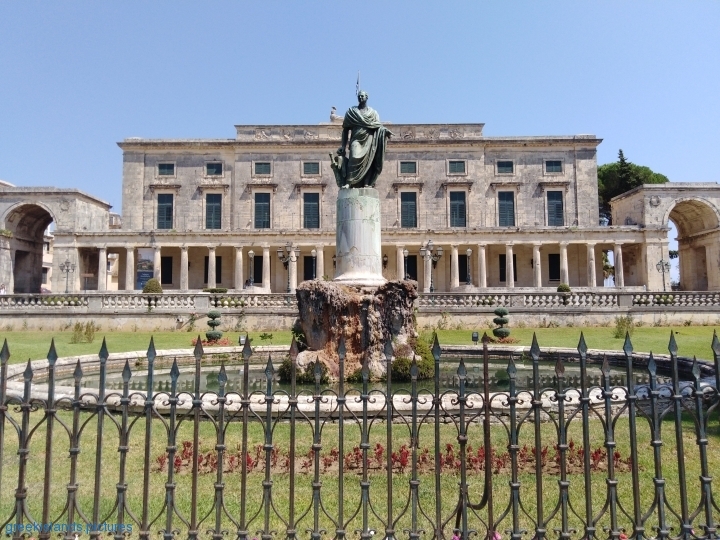 The foundation stone was laid on the ground on St. George’s Day in 1819. The Palace’s location is between the old town hall of Corfu and the Venetian castle. After the union of the Ionian Islands with the  Kingdom of Greece in 1864, the palace served as a royal residence until the Second World War. 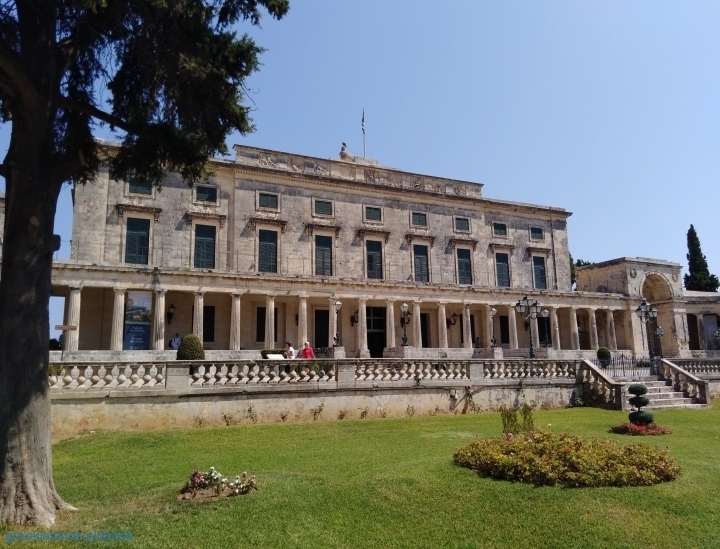 Today the palace houses the Asian Art Museum of Corfu. The museum’s collection began to gather in 1927 and consists mainly of donations, with the largest of Grigorios Manos with 10,500 pieces. It is the only museum in Greece devoted to the Far East and India’s art and antiquities.   The palace is designed in Regency style by British architect George Whitmore, a Colonel and later Major to Royal Engineers. It was mainly built with the white stone of Malta. The two gates that surround the palace are St. Michael’s Gate and St. George Gate. 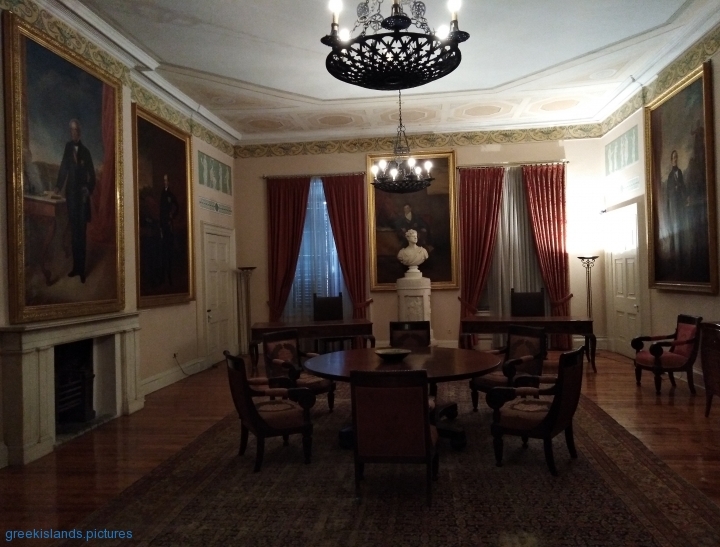 The Official Rooms consist of a majestic staircase, a Rotonda in the center leading to two large halls, the Throne Hall and the official dining room. The palace was renovated for the European Union Summit in 1994.

The museum is housed in the family’s country house, in the area Koukouritsa of Evropouli in Corfu, in a beautiful garden with great views.        The Capodistrias Museum is the only museum dedicated to the life, work, and depot of John Capodistrias, the great diplomat and politician, the first Governor of Greece.

The Museum offers visitors the unique opportunity to explore the history of Corfu, 19th century Europe and modern Greece. The visitor can see in the Capodistrias Museum the country house of the Capodistrias family, personal items of Ioannis Capodistrias, and books, maps, etc. Moreover, honorary gifts are given to the Governor, such as medals, religious icons, and objects from his time in the Court of Czar Alexander I ‘. Also, artwork, furniture, and household items of the Governor and his family.

4. Others Museums and Archeological sites

Others Museums and Archeological sites which also deserves a visit are:

Moreover, there are historical buildings such as :

*in the city of Corfu, the Theater of Saint Giacomo was the first theater built and operated in Greek-speaking areas during recent years. It was inaugurated in 1733, and until 1893 it became a focal point for opera and musical theater. It attracted Italian musicians and composers, many of whom became permanent residents of Corfu and contributed to the local music scene’s development.

1.  Church of the Antivouniotissa  – Byzantine Museum 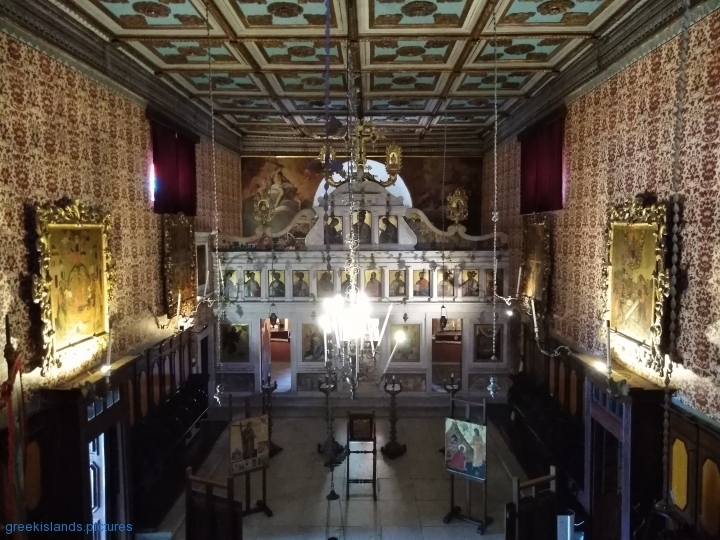 The church of the Antivouniotissa is an aisleless, timber-roofed basilica in which the particular characteristic of the Corfiote churches of the period is preserved. The interior of the nave is impressive and imposing and retains several features of the so-called Heptanesian Basilica type.  The stone iconostasis is a later structure.

The collection includes some important items, by both known and anonymous artists, dating from the 15th to the 19th century. It thus gives a full picture of the religious and artistic output during this period on Corfu and the intellectual movement more generally. Like the Ionian Islands, Corfu became a stopping point and place of residence for artists, mainly from the Cretan School, en route from Crete to Venice, particularly after Crete fell to the Ottoman Empire in 1669.

This movement of both artists and artistic trends, combined with a dedication to the Orthodox doctrine, Byzantine survivals, and direct contact with the West, led to creating a high-quality artistic aesthetic and models over the centuries, not only amongst the locals. The Antivouniotissa Museum, through works by artists from Nicholas Tzafouris, Michael Damaskinos, and Emmanuel Lambardos to Emmanuel Tzanes, Victor and Michael Avramis, and others, is fully representative of five centuries of religious, artistic expression.

2.  Litany of the Saint Spyridon, “the Patron Saint of the Corfu Island.” 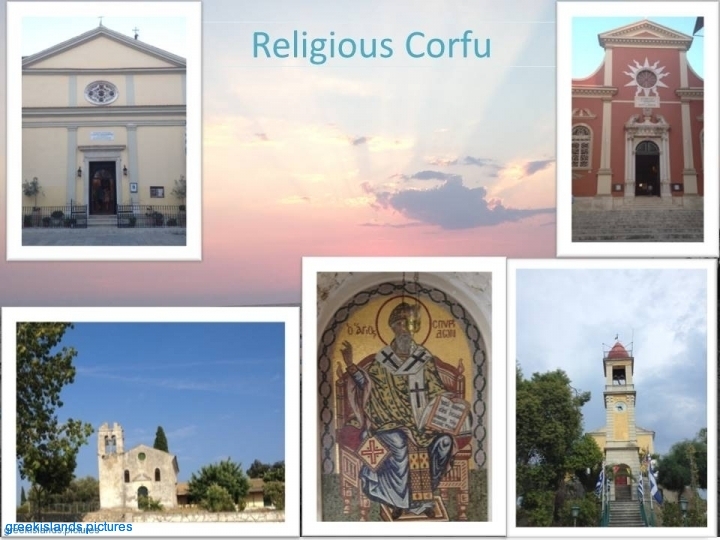 According to the religious tradition, Saint Spyridon, in 1716, saved the island from the Ottomans when they disembarked on the island and after seizing the fortifications of Mantoukis and Garitsa and the Fortresses Avramis and Sotiros, continued their devastating attacks on the island for a whole month.

On August 9, 1716, Ecclesiastical history says a terrible storm broke out on the island, hitting the ships of Turkish troops scattering panic in their camp, and holding the Corfu Fortress impregnable. Many Ottoman soldiers fled, saying that they saw Saint Spyridon in the form of a monk coming out of the homonymous church and expelling them with a lit torch. That is why the departure of the Ottomans from the island on 11 August was then attributed to the miraculous intervention of Saint Spyridon. 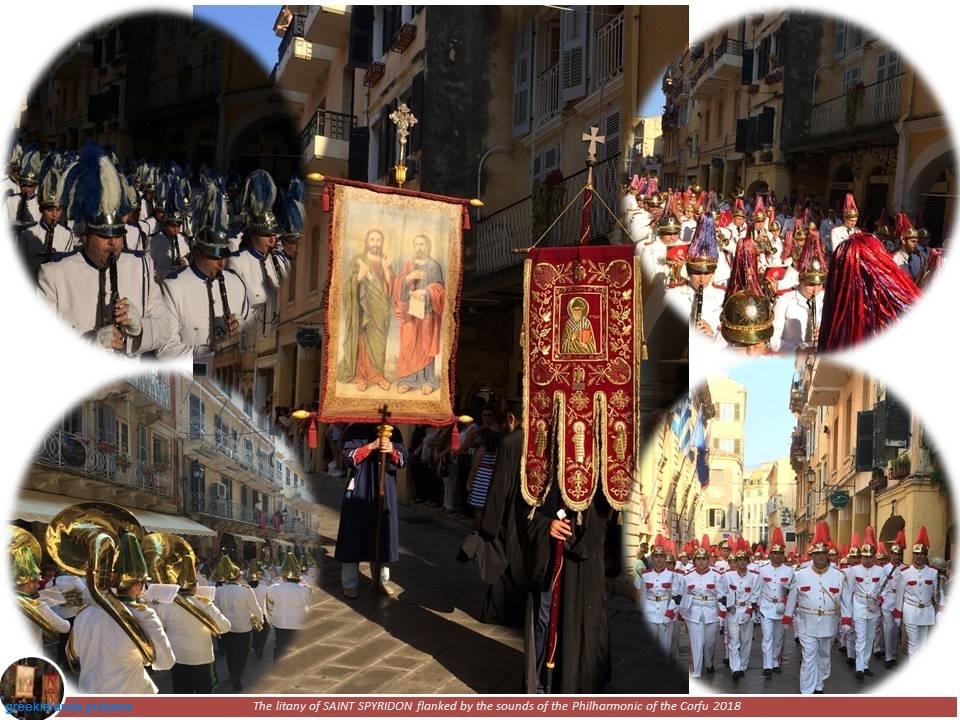 The litany, flanked by the Philharmonic of the Corfu’s sounds, accompanies a large crowd of people, all the priestly clergy of the island with archbishops and bishops. 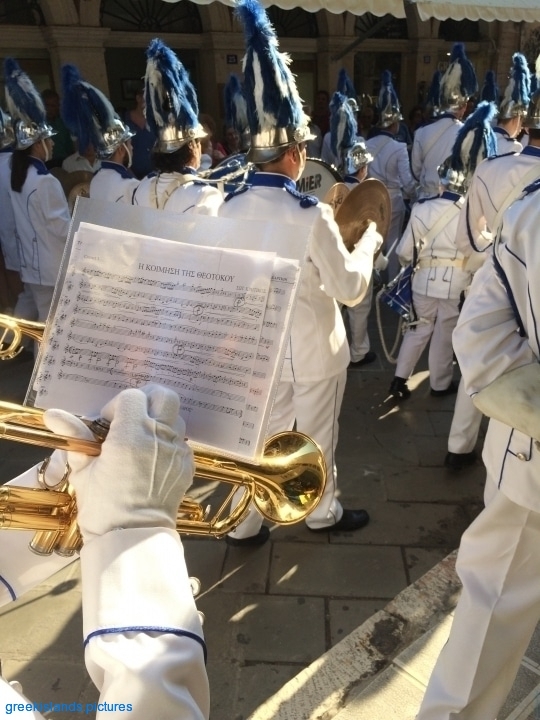 The Philharmonics of Corfu are worldwide known. There are 18  philharmonics on the island, four of which are located and operate within city limits. The names of the four largest philharmonic bands are: 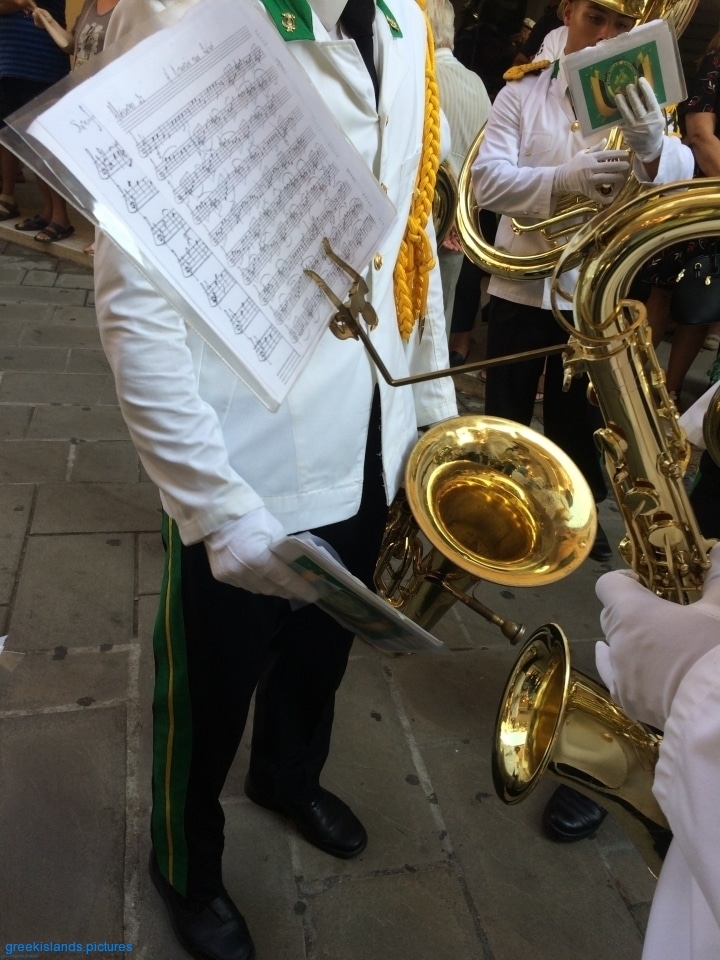 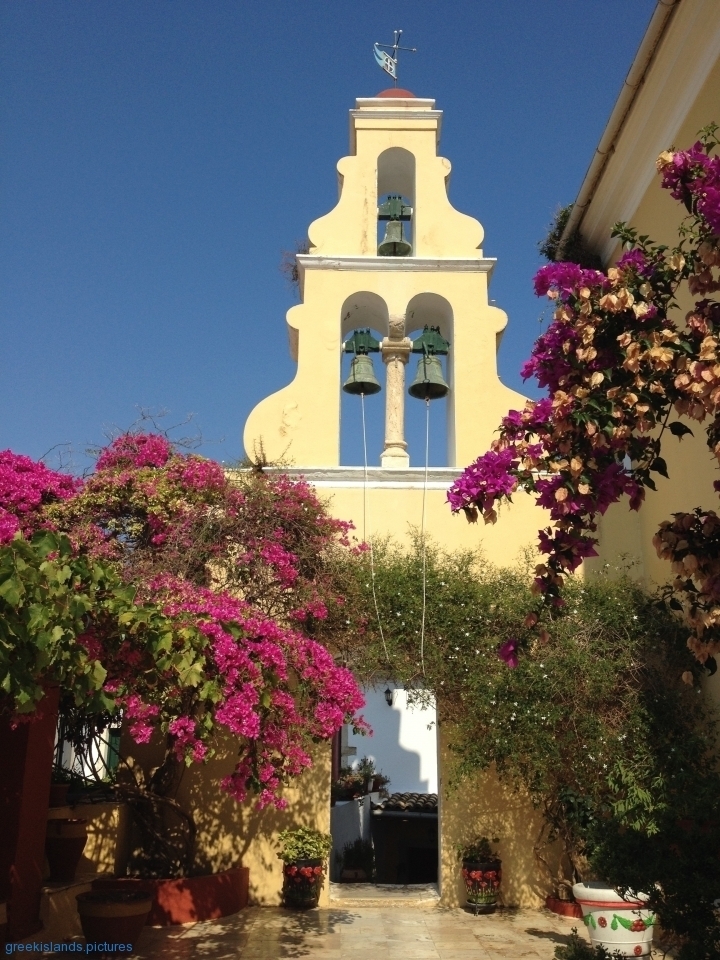 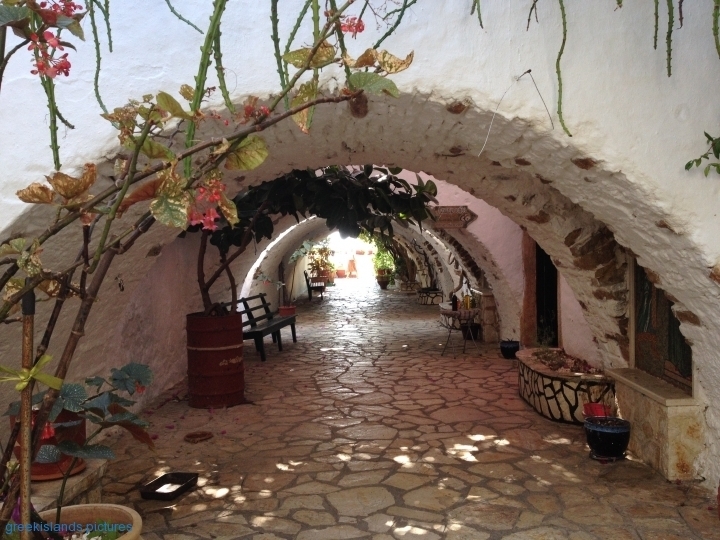 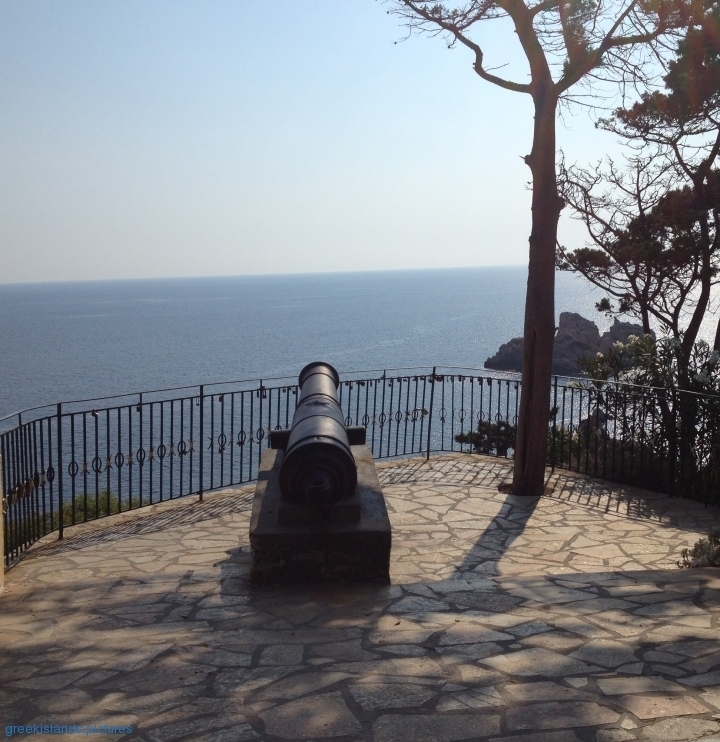 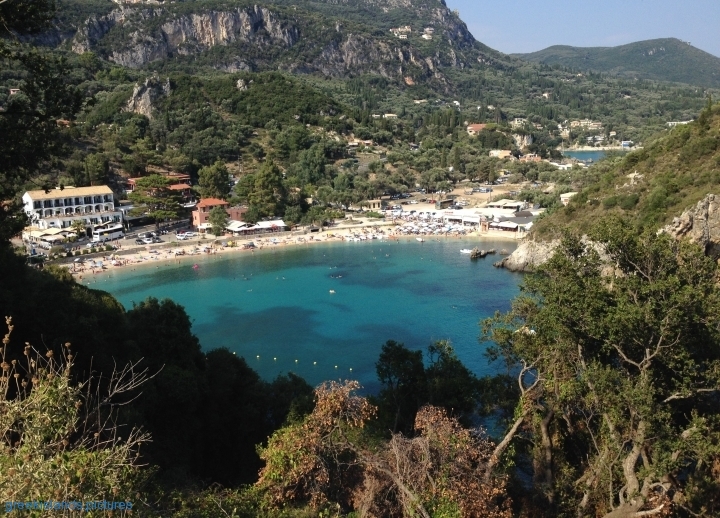 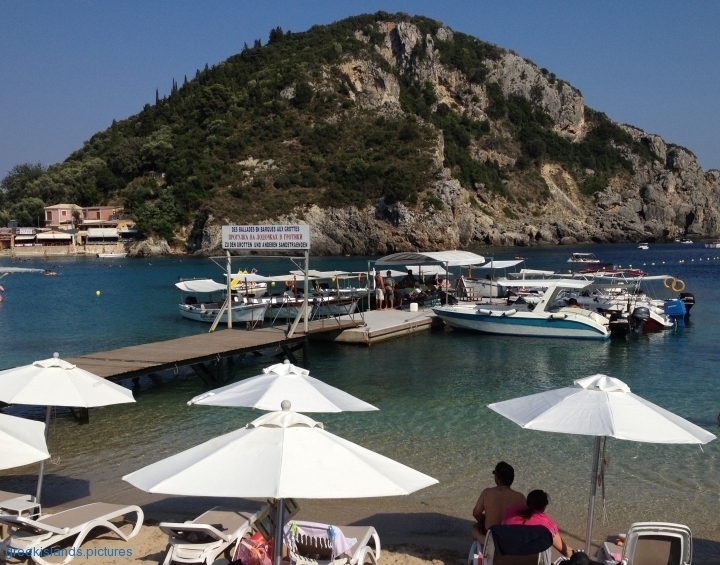 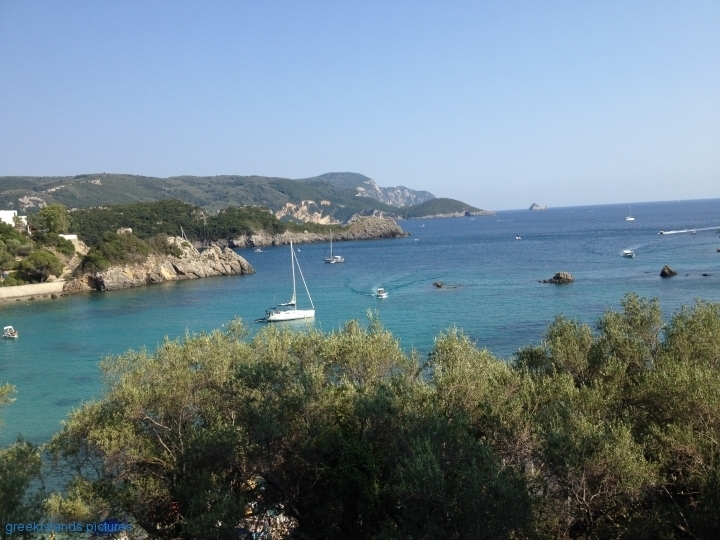 It is located on the western coast of the Korfu between the villages Pelekas and Vatos. The beach is approached by car up to a point, and then you have to go down a few stairs to a fairly steep downhill.  Attention on the road is narrow and downhill with turns. If you do not mind walking, park as high as you can. 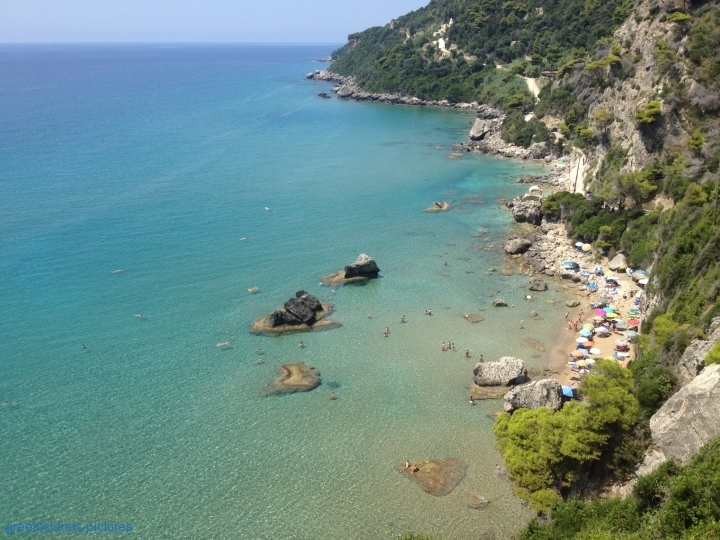 It is one of the cleanest beaches in Corfu. There are no hotels, apartments, or restaurants on the beach, so it remains natural and unspoiled by progress. Beautiful green-green waters when you see them from above and enjoy them just as you descend. 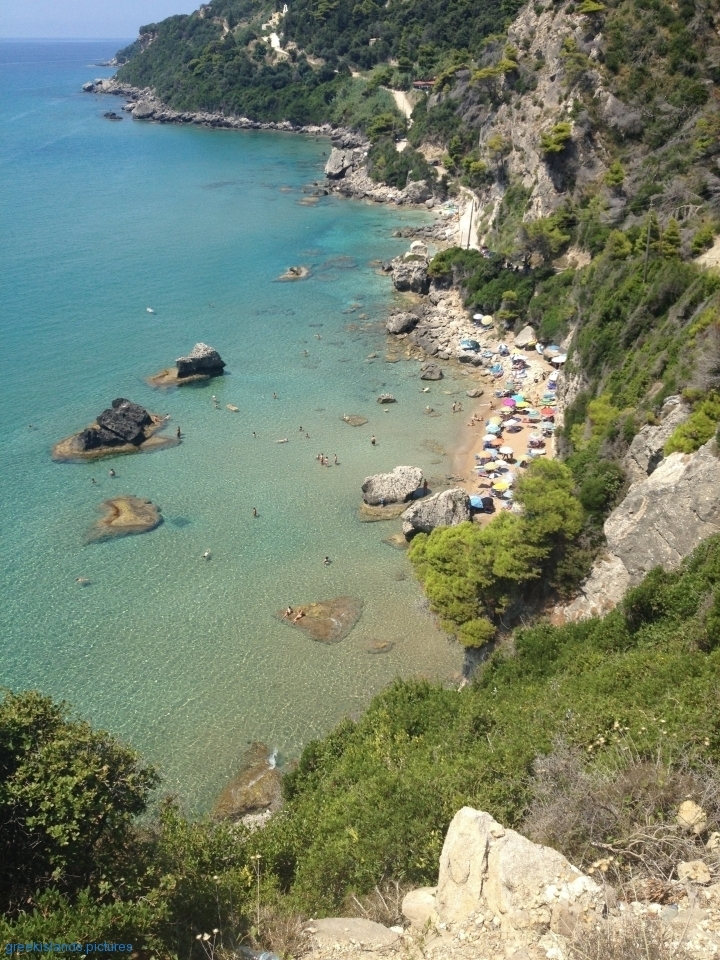 Νorth of the beach, on the hill, you will find the monastery of the Blessed Virgin of Myrtiotissa, 14th century, which also deserves a visit. 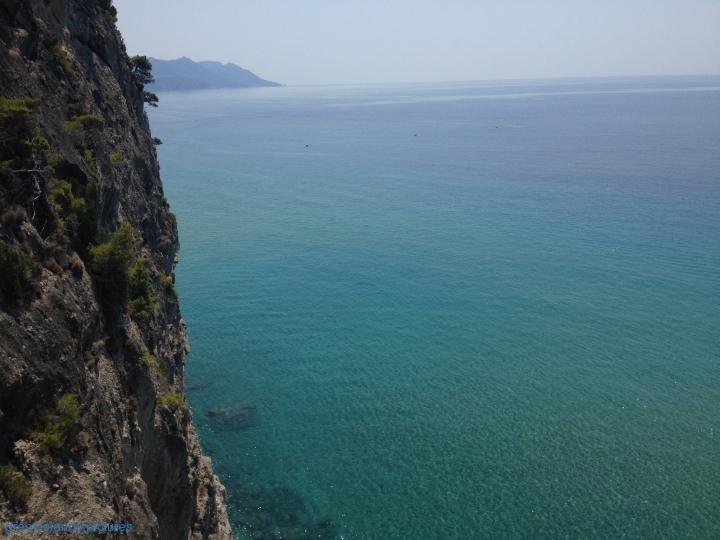 The spectacle compensates you once you reach the beautiful beach with clear, crystal clear waters, soft sand, wild scenery with rocks, and absolute tranquility. 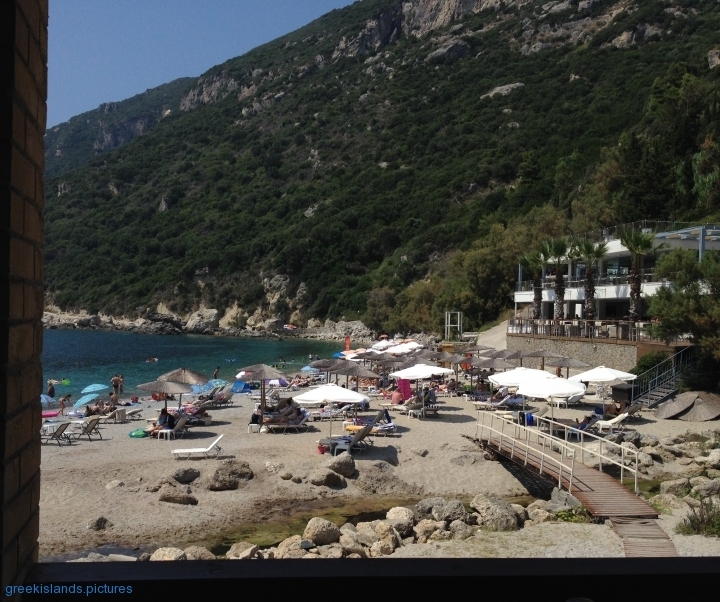 Ermones is one of the most enchanting places in Corfu. It is a bay between high cliffs and sea, just as steep and wild, with deep and cold waters. 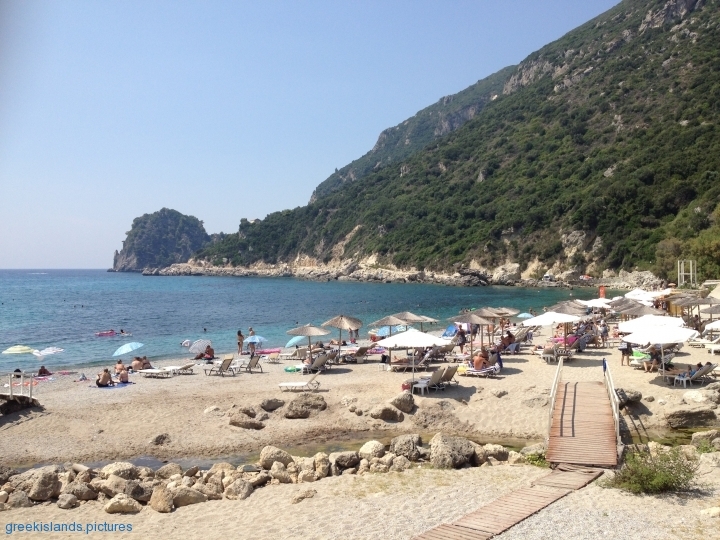 The beach combines pebbles with a little sandy beach. 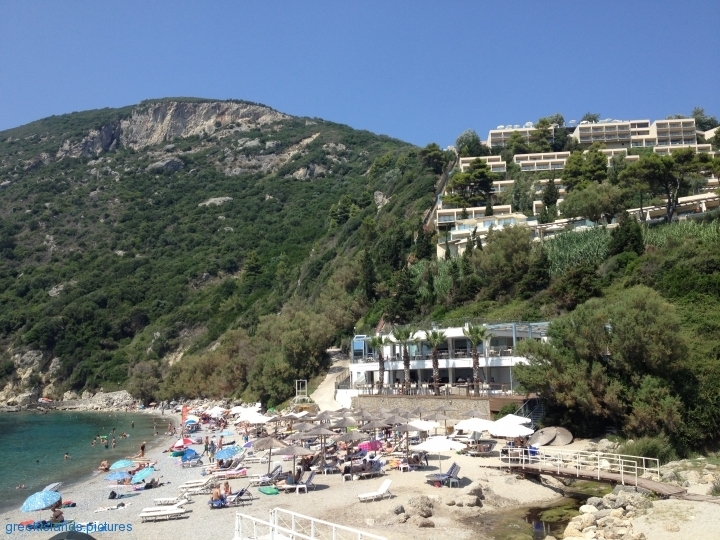 There are two taverns in the area where you can eat and taste the traditional local dishes of Corfu. 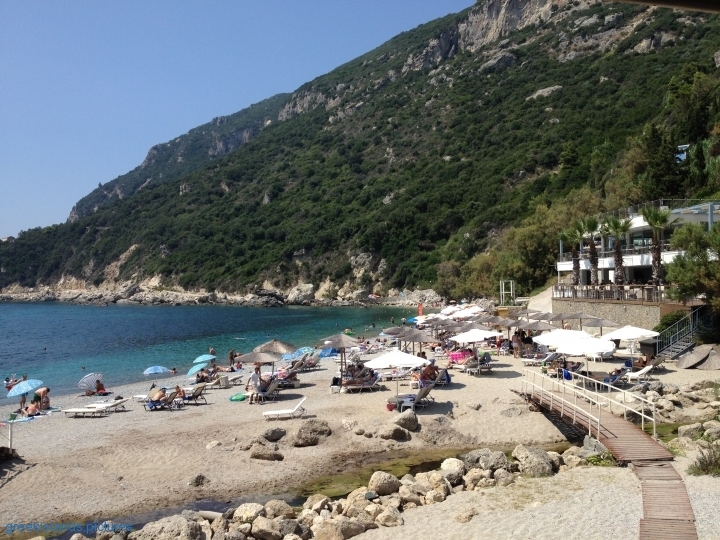 Tasting the local, traditional dishes of Corfu cuisine such as pastitsada (Greek: Παστιτσάδα). It is a traditional Sunday dinner and sometimes called pastitsada Korfiatiki. The main ingredients are meat and thick spaghetti. In the villages of Corfu, the housewives use cinnamon in their cooking.

Sofrito is a traditional food of Corfu and is one of the most famous and classic dishes of the island, along with the pastitsada and the bourdeto. The name of the dish comes from the Italian Sofritto, which means a mild word that existed during the Venetian domination. The locals use beef sliced, fried in oil, and simmering with three ingredients that create a balance of tension between them (vinegar, garlic, parsley), often together with white wine. They serve it hot with rice or fries and frozen dry white wine.

The bourdeto or bourgeto or bourieto is a rather thick, fishy soup, mainly found in the Ionian Islands. At the same time, it is considered the traditional and most characteristic dish of Corfu. Its origin and name come from Italy – brodetto in Italian means broth. The locals make Bourdeto with various fish species (cod, octopus, scorpions, galleys, cephalopods, paraglides, etc.)