Karystos is a seaside town and a port in southern Evia and is the seat of the municipality.  In 1951 it numbered 3,118 inhabitants, while its population at the 2011 census amounted to 5,122 inhabitants. 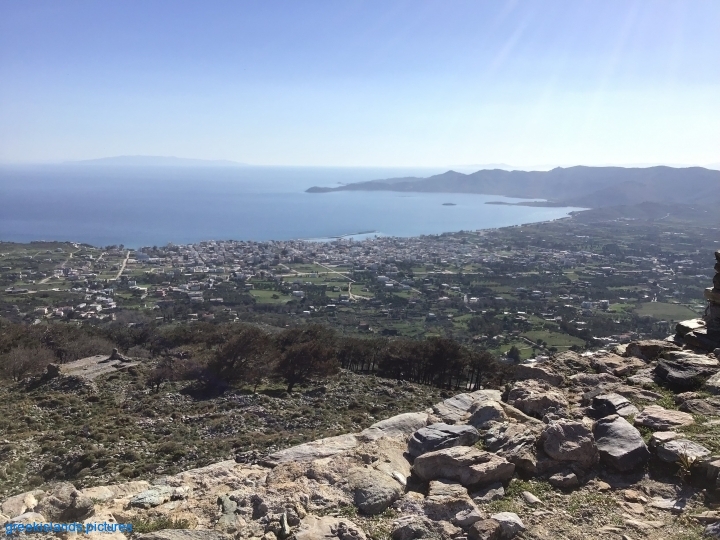 Karystos has a modern street design, squares, neoclassical buildings, and traditional mansions. The beaches of Karystos and the harbor with the traditional cafes, the ouzeri, and the picturesque tavernas make it attractive for visitors, mainly from Athens.  There is the availability of a variety of hotels and accommodations, modern and traditional. 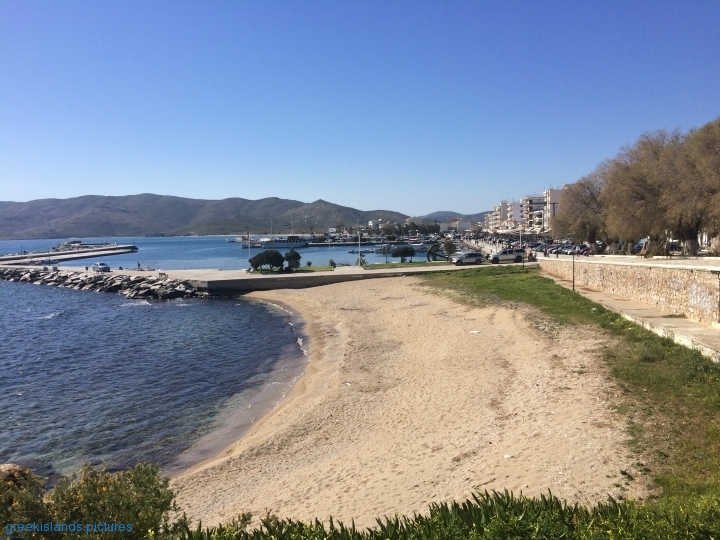 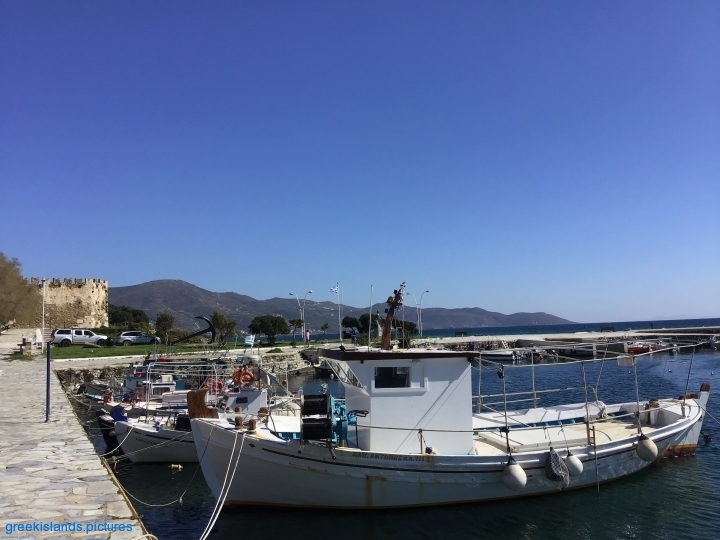 It is one of the first cities of Greece to have acquired a spiritual center with a lecture hall, a library, and a museum. Thanks to the combination of mountain and sea, Karystos today has become a tourist center with lively traffic, especially in the summer. 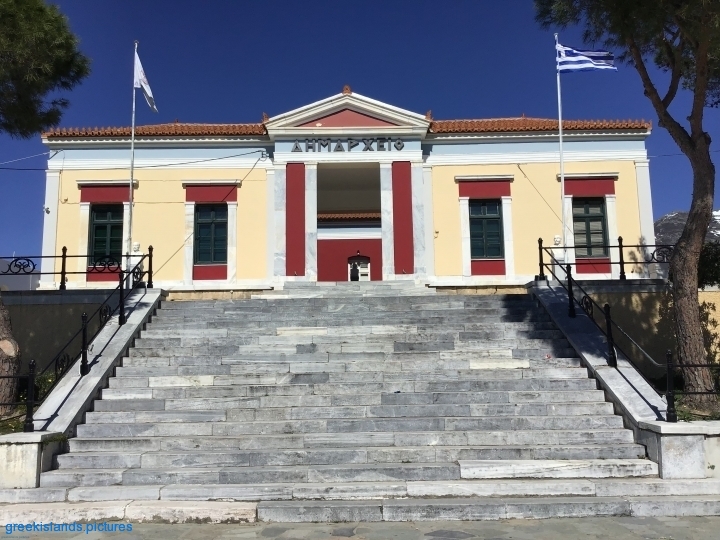 Karystos has an urban plan with wide streets and squares made based on a plan and upon the order of King Otto by the Bavarian engineer Mirbach. For this reason, and in honor of Otto, this town was given the name “Otonopolis” in 1848, renamed Karystos after the postwar revolution in 1862.

A brief history of Karystos

During the Ottoman domination, the wider Karystos region was of great strategic importance to the Ottomans, as it was in a central spot between Constantinople, Crete, the Peloponnese, and Smyrna. So it was a control center of the Aegean fleet refueling station, as any of the islands were granted a special autonomy status due to pressure from the Western Powers. For this reason, the Ottomans made a great struggle to keep Karystos (then “Kisil Hissar” ), which was united to Greece only in 1833. 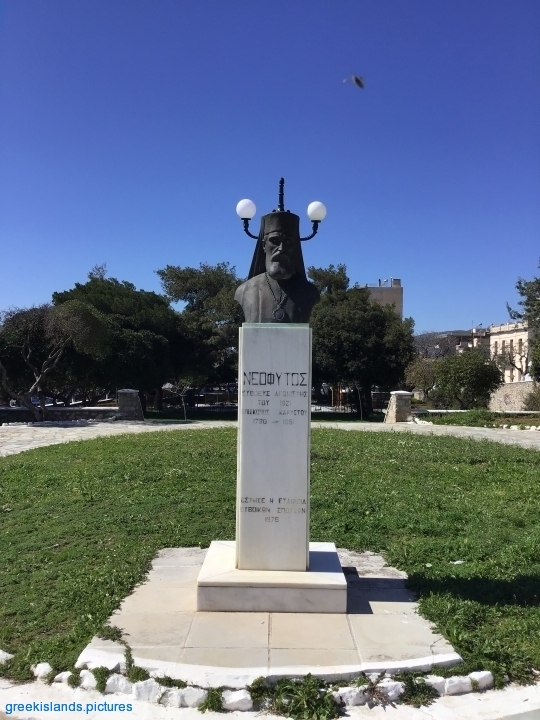 Since ancient times, Karystos has been known for the famous green-white marble with the emerald green veins, “Karystia and Styria stone” (also cipollino “onion-stone” or “onion”), which were mined from Styra to the western foothills of the mountain of Ochi. This marble was used mainly in the Roman era, when its demand was very great, more in the form of large-sized monoliths, some of which are preserved in the NW of Eagle.
The exploitation of Karystos shale quarries is a dominant factor in southern Karystia, from ancient times to modern times. In an area where there is virtually no alternative employment, most Southern Carristian families work and live in quarries and stone processing plants.

The sidewalk next to the boats, castles, and ancient quarries.

Karystos astonishes the visitor with its cosmopolitan air and its picturesque harbor, its outstanding design, its neoclassical architecture, and its mansions. 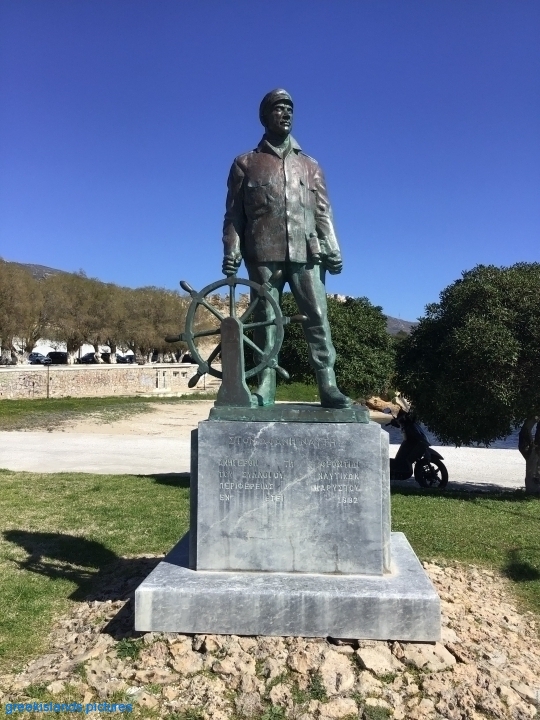 The Statue of the Silent Sailor

At the foot of mount Ochi (1,400 m) and above the city of Karystos stands the most important ancient monument of Evia, the medieval castle Castello Rosso or “Kokkinokastro” – red castle. It is located four kilometers away from Karystos, between the villages of Gravias and Myli. 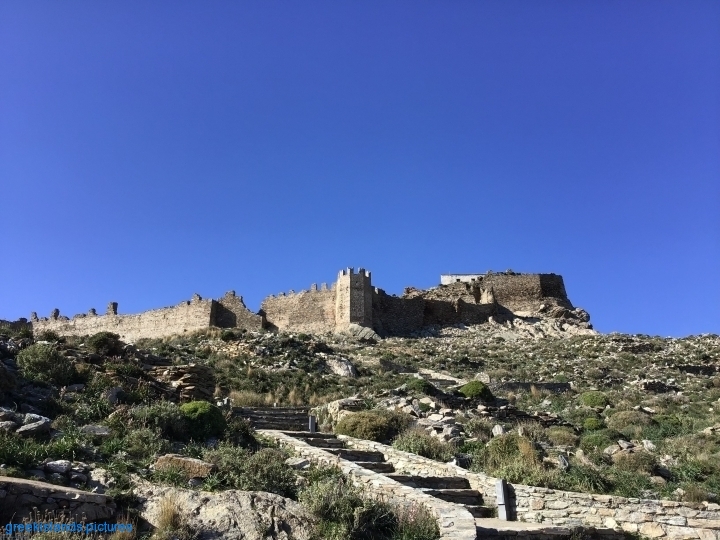 The castle was named by the Latin “Castel Rosso,” while the Greeks retained the name “Kokkinokastro.”  The name is due to the red stones with which it has been built – from the shale rocks of the region.

The Byzantines built the castle, but throughout the Frankish domination, it was claimed by Byzantines, Franks, Venetians, who eventually remained as their masters until the occupation of Evia by the Turks. In 1833 it was delivered to the Greeks. Its construction is placed in 1030 AD., while on the mountain, there is also the chapel of Prophet Elias. 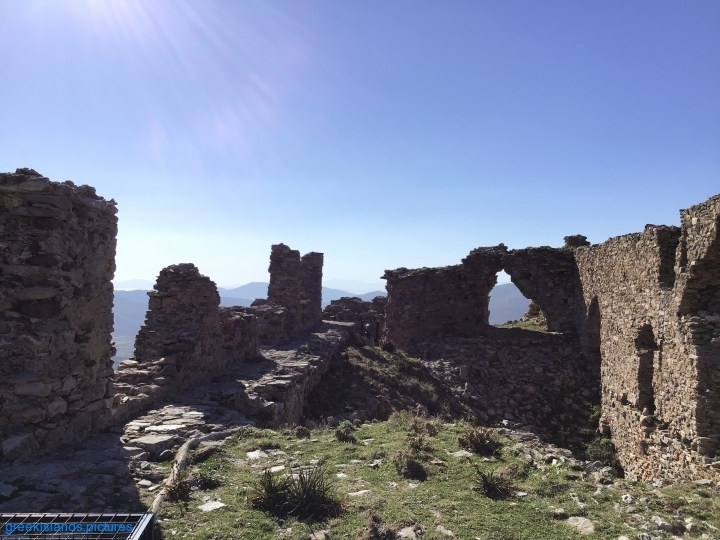 According to mythology, on Mount Ochi, Zeus and Hera were first brought together, and there, they made their first secret encounters. Indeed, the mountain is alleged to have taken its name from the ancient  “shemouso,”  which means “get together,” as the ancients believed that the two gods fell in love there.

One of the major attractions of Karystos is fortress Bourtzi. It is located next to the harbor and the archaeological museum, on the main coastal road of Karystos.   It is an old Venetian fortress of the 13th century AD. (a building from 1350), which was repaired, restored, and decorated in 1960 by the Archaeological Society. 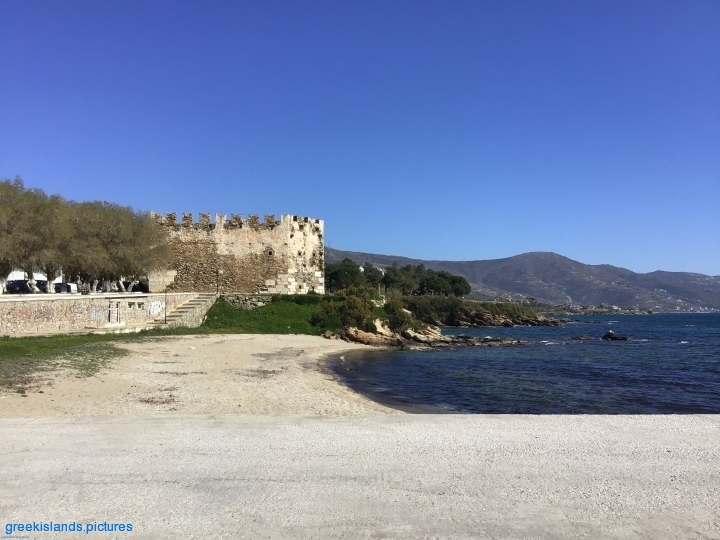 The castle has many loopholes. It is preserved intact. The castle is kept in good condition. For its construction, the Venetians used the Roman Mausoleum’s marble fragments at the center of the «market,» building materials. 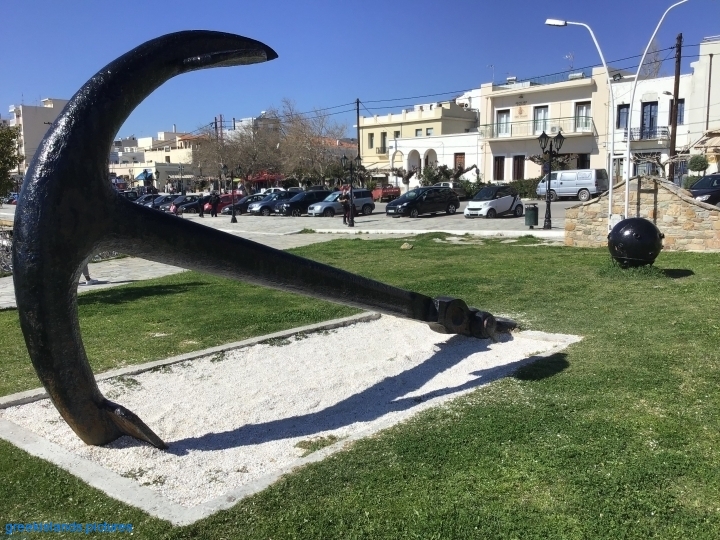 The Archaeological Museum of Karystos is located on the eastern side of the harbor of Karystos, just across the Venetian tower, the Bourtzi. The  Museum is housed in the left-wing of the Giokaleio Foundation. It is a legacy of benefactor Nikolaos Giokalas. It was built in 1959 at Maximilianos Square in Karystos. It includes rooms of the Archaeological Museum (1988), Theater, Library. 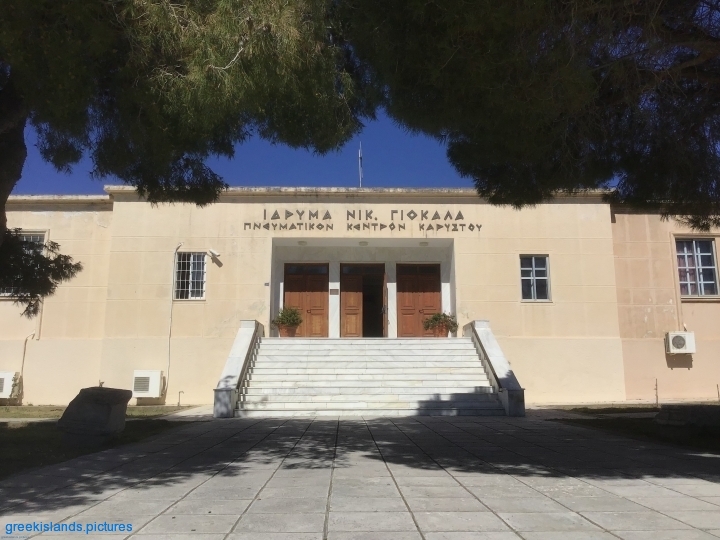 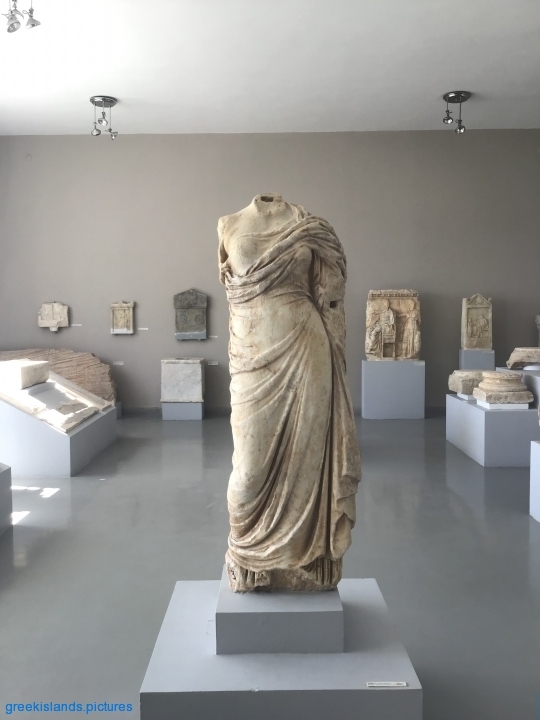 Visitors see a headless statue of a standing female figure (3rd century BC).

Dragon houses are megalith(large stone) buildings in southern Euboea dating back to classics (5th century BC) and early Hellenistic times. They are located near Styra, Karystos, and the peak of Mount Ochi.

Dragon houses are located mainly in southern Evia and in the central, yet the most famous and well-preserved is the top of Ochi. This is a total of 23 megalith buildings built with huge stones on top of each other without any other building material being used. According to folk tradition, these homes built dragons as their location and form do not refer to humans but by … dragon! The date of their construction dates between the 12th and the 6th centuries BC.

Most dragon houses are still preserved in excellent condition, where the gray stone of the area dominates and where no other building material is present. Professor Nikolaos Moutsopoulos found, in an underground construction beside a dragon house, animal bones, broken vases, and sacrificial remains.

Dragon houses have recently been interpreted as religious buildings (“houses”) where worshiped ancient Greek deities. Some of these, in earlier respects, were considered to be cottages, shelters, or buildings of military use (outposts, fryktories).

Located at the peak of Profitis Ilias of Mount Ochi with dimensions of 12.7 x 7.7 m.  The entrance is made up of pilasters and an anvil of monolithic construction, while the roof is made of large stone blocks. The cult findings cover the period from the 6th to the 2nd-1st cent. B.C.  Based on the findings and the ancient testimonies, it is considered a sanctuary of Zeus and Hera. However, it had previously been interpreted as an outpost, frythroery, shelter of quarries, or a place of residence of Roman soldiers who guarded the mount Ochi quarries.  Excavation on the floor of the building revealed a significant number of black-painted cups, which were concentrated and overturned. Also, in the same excavation were found shells (vases fragments) with engraved inscriptions (graffiti).

During the Ottoman domination, the owner was Omer Bey, who later became Pasha of Evia.  At that time, the estate was called “Sa Perivolia of Pasha.”

After the liberation of the island, around 1840, the estate was purchased by John Paparrigopoulos, Russia’s Vice-Consul in Karystos and Lord of King George A.  In 1877, Michael Paparrigopoulos, son of John, sold the estate to Ioannis Konstantinidis, a merchant from Alexandria, Egypt, who preserved it in excellent condition by cultivating citrus trees.

The City of Karystos’ urban plan is a donation by King Othon, hosted on the estate in 1841.  In October 1953, on the occasion of the inauguration of the water supply project of Karystos, King Paul was also hosted in the estate.

At around 1960, the estate was abandoned and devastated. In 1986 the estate was purchased by Pavlos G. Karakostas, and their company was established for the restoration and agricultural exploitation of the estate. It was given the name “Domaine Montofoli” (so-called from the old hill that starts from Castello Rosso).

Some of the exhibits are local costumes, embroidery, old furniture, and agricultural tools.  It represents the karyston house.

At the beach of Karystos town.  Southwest, at the beaches of Livadaki, Paleopitara, Mnimata, and Agia Paraskevi.  At the beaches of Psili Ammos, Kavos, Buro, Vathi Avlaki, Agii, Kalami, Kioni, Platis Gialos, and Livadi.

By Car from Chalkida

The coast connects the city of Chalkida with South Evia.  After the high bridge, follow the signs to South Evia, and after the town of Aliveri, follow the sign to Karystos.   The total duration of the travel is 2.5 to 3 hours.

By Ferry from Rafina

Ferry boats make itineraries every day and all year round. The sea route lasts 60 minutes. The ferry arrives at the port of Marmari. The distance between Marmari and Karystos is 11 km and is covered in 15 minutes. In most ferry services, the KTEL bus in Evoia waits at the port for the Marmari-Karystos route.

By Ferry from Styra

There is also the solution of a ferry that services the route of Ag. Marina –  N. Styra takes  45 minutes to get to Styra and then about 30 minutes by car, to the center of Karystos (The distance is 45 kilometers). 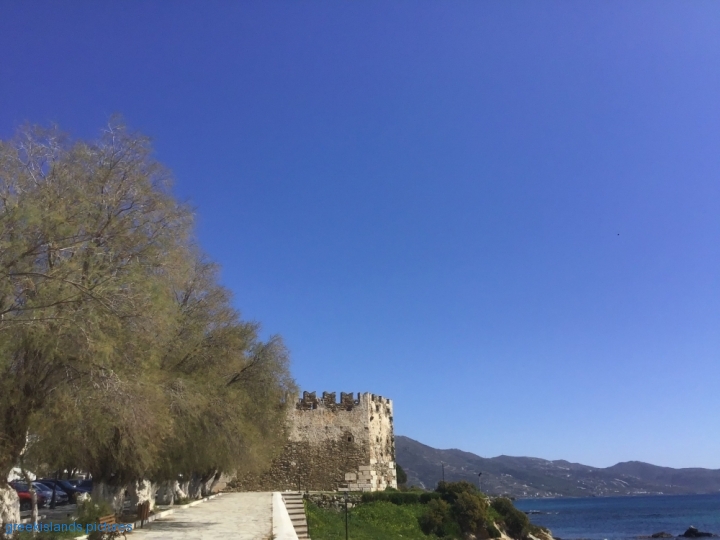