Patmos island pictures depict Patmos Island (Greece, Dodecanese), an island with religious and spiritual culture. John the Apostle lived here and wrote the Book of Revelation (the Gospel of John).

Forbes magazine, in 2009, named Patmos “Europe’s most idyllic place to live,” writing that “Patmos has evolved over the centuries but has not lost its air of quiet tranquility, which is one reason why people that know it return again and again.

The residents live in Chora(the capital of the island with architectural interest and cultural tradition), in Skala (which is the port and the largest settlement on the island, Kampos, and Grikos (is built on a bay with a magnificent view of the Kalikatsou stone.  It has been recognized and included in the most beautiful bays of the world from Unesco).

In 1999, UNESCO placed the historic center of Chora, the Monastery of St. John the Theologian, and the Holy Cave of Apocalypses in the World Heritage Monuments.  Also, the European Union includes Patmos among the top seven most important pilgrimage destinations of Europe.

The capital of Patmos is Chora,  a medieval town with stone vaulted streets. The visitor will admire the white mansions as well as the houses of the Aegean sea style. Moreover, the visitor will find picturesque cafes and traditional restaurants with live music and local dances from Patmos. 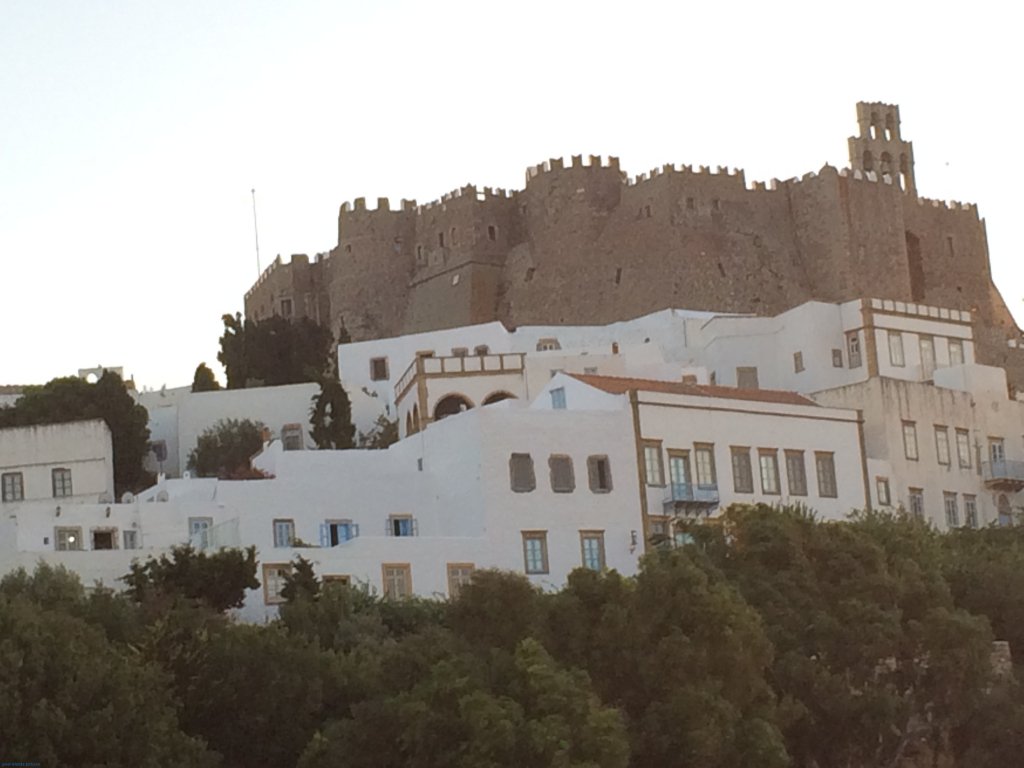 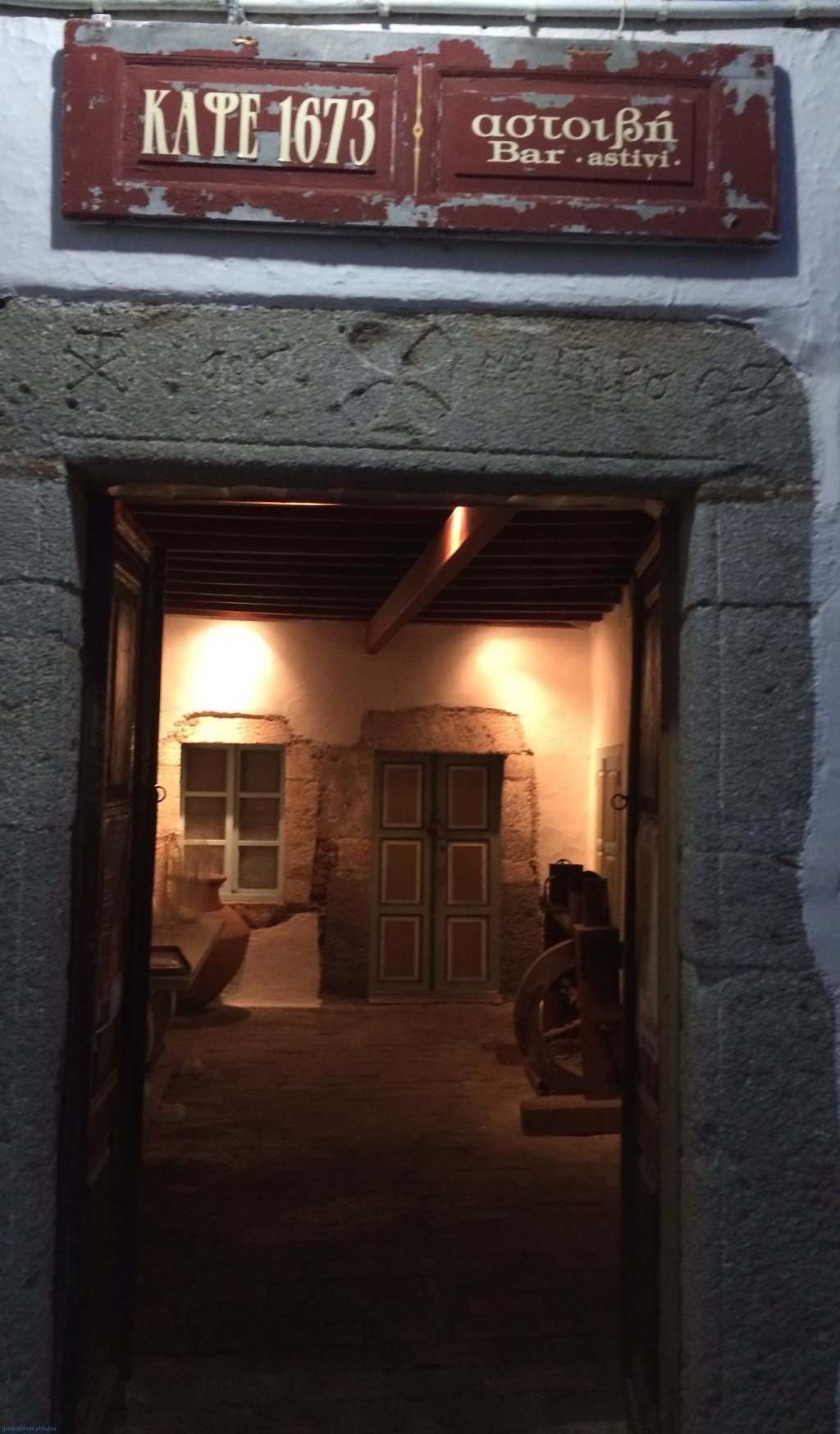 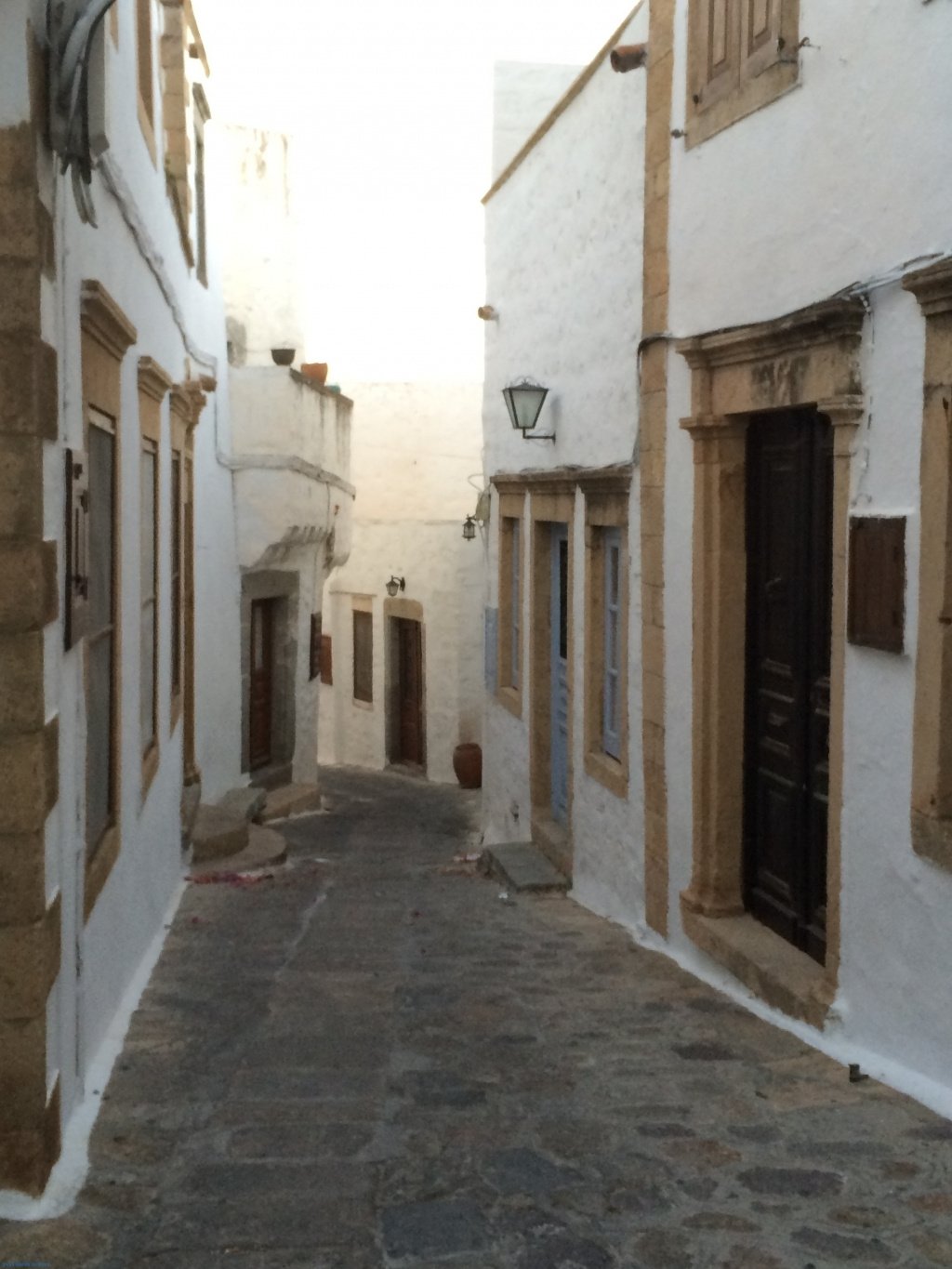 The port of Patmos is Skala,  with a lot of ship traffic, shops, stores, and nightlife. 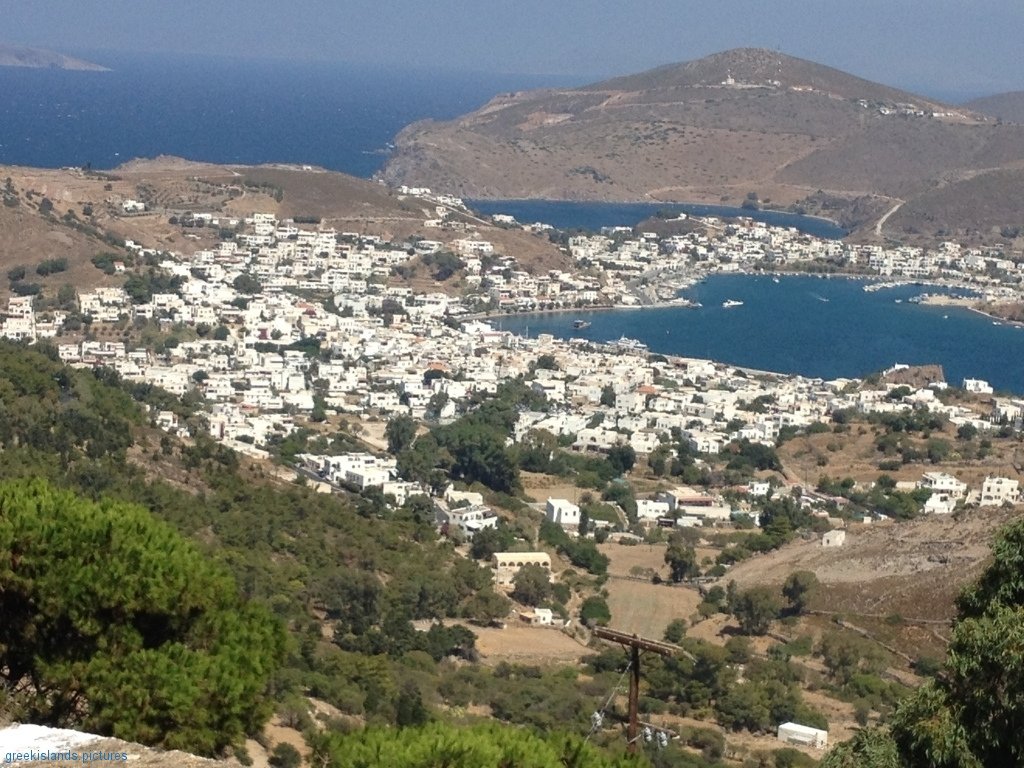 Nikolaidis mansion, an urban building, was built between the 17th and 18th centuries. It is located in the northeastern part of Patmos Town, in Chora. The exhibition includes a collection of ancient findings coming from Patmos.  Also, basic features of the manor houses, such as rainwater reservoirs, storage, preparation areas on the ground floor, reception areas and main floor use, semi-enclosed courtyards in the surrounding area, and large terraces. Unique elements are the chapel of Agios Nikolaos and the particularly richly decorated “abataros,” a wooden structure on the upper floor that operated partitions and had storage space.

Simantiri Mansion is located in Chora. Τhis mansion was renovated into a folk museum and is characteristic of the patmian culture. Some museum exhibits are Gyzis paintings, the 250-year-old living room, furniture, kitchen utensils, decorative items, etc.

Center of Orthodox Culture and Information

The Center of Orthodox Culture and Information of the Holy Monastery of Ag. Ioannou of Theologos is located in the port of Skala, next to Agios Phokas. The visitor is informed with rich online touch screen material, through views and presentations, in five languages (English, French, Italian, German, Russian).

The ancient Acropolis is an archaeological place situated on the top of the Kastelli hill in Skala. To visit the ancient Acropolis of Patmos, you will follow the three-kilometer path that starts from the port of Skala. The view that Kastelli offers will reward you for your journey to the summit.

The relic of Baptistery

Annunciation of John the Theologian (95 A.D). It is located on the beach of Skala.

Patmias theological School was providing knowledge to important figures of Greece. The foundation of the Patmias School is the most important issue of the history of Patmos in the 18th century. The founder of the school was Makarios Kalogeras.

The windmills in Chora

The tree windmills are located on the top of Chora’s hill. The two of them were built in 1588 and the third in 1863.  In the 1950s, where flour production ceased, the windmills were abandoned, but in 2010 they were restored. Europa Nostra nominated the windmills as the best-restored windmills in Europe.

The Holy Monastery of Patmos  St John the Theologian

The construction of the holy monastery started in 1088 by Blessed Christodoulos, to whom the Byzantine Emperor  Alexios I Komninos transferred ownership of the island of Patmos with his imperial goldenseal.

In St John the Theologian Monastery, Chapels of the post-Byzantine years such as St Basil, St Nicholas, and the Holy Apostles (1603).

The museum, the monastery library with great manuscripts, among the documents is the “chrysocolla,” the edict by which Alexios Comninos I granted the island of Patmos to St Christodoulos in 1088. The monastery belongs to Ecumenical Patriarchy and is a Patriarchal Exarchate. 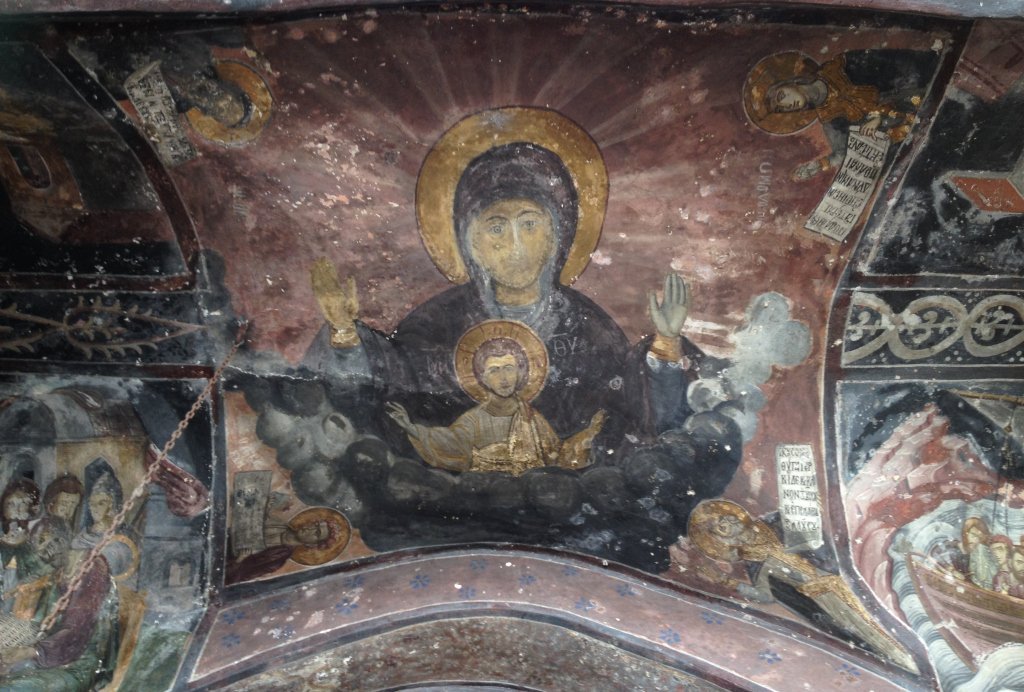 According to religious history, Patmos has been known since the 1st century with exile for two years by John the Theologian.

The Holy Cave of Apocalypse

The  Holy Cave of the Apocalypse is located in Patmos, on the road between Chora and Skala. It is believed that in this cave, Saint John the Apostle, exiled to Patmos,  had the visions and wrote the Book of Revelation. 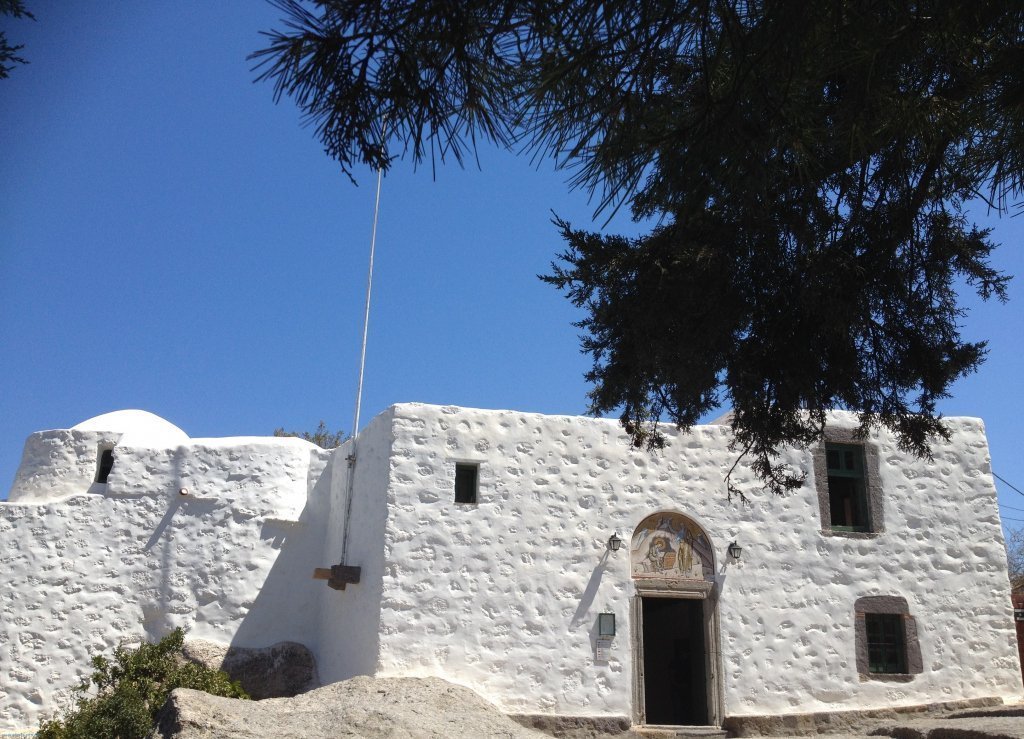 The Holy Cave of the Apocalypse, recognized as World Heritage Site in 1999.

John the Theologian was a disciple of Jesus, who was in the cave of Agia Anna and wrote the “Gospel” (probably) and “Revelation,” as he testifies:

9I, John, your brother and companion in the suffering and kingdom and patient endurance that are ours in Jesus was on the island of Patmos because of the word of God and the testimony of Jesus. 10On the Lord’s Day, I was in the Spirit, and I heard behind me a loud voice like a trumpet, 11which said: “Write on a scroll what you see and send it to the seven churches: to Ephesus, Smyrna, Pergamum, Thyatira, Sardis, Philadelphia, and Laodicea.”

The Holy Monastery “Evangelism of the Mother of the beloved.”

The monastery is located in the south part of Patmos. It was built in 1613 by the monk Nikiforos. In 1937 new buildings were added by monk Amfilochios. 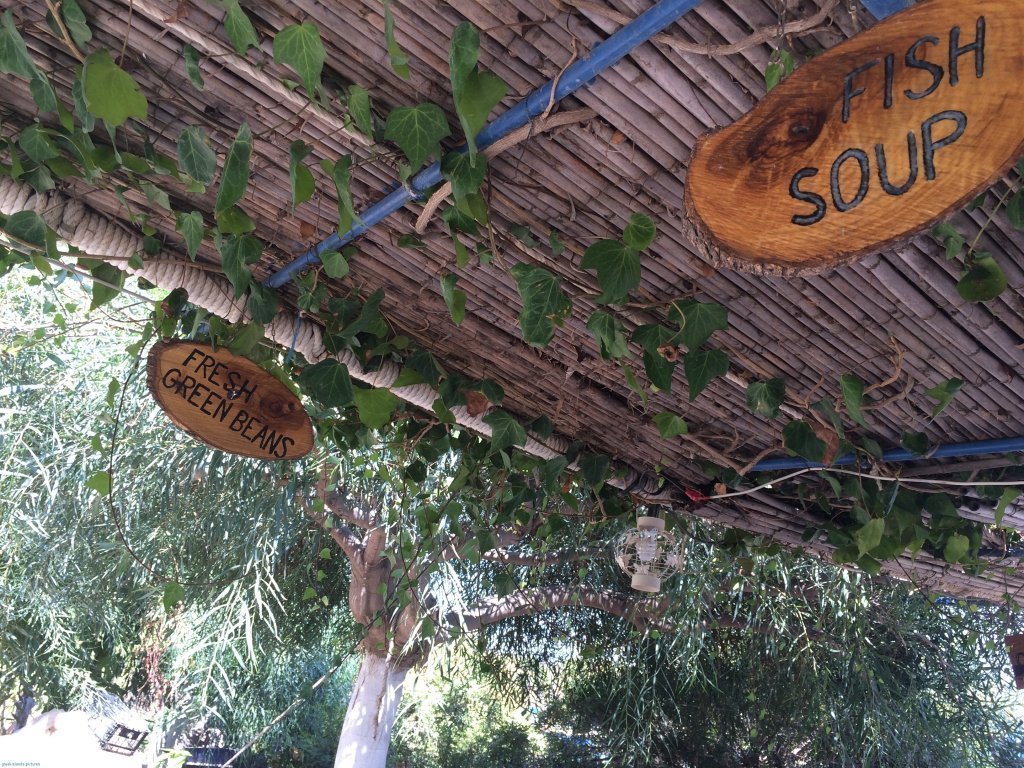 It’s worth to tasty revithada (chickpeas), or mousaka cooked in earthen pots.

Also, try the traditional pastries of Patmos, such as  “pouggi,” little syrupy pouches made with fyllo dough and almonds, “apidakia” with walnuts, and honey.

Tips->  A good place that combines a Greek taverna with a magnificent dancing show, and entertainment is Aloni.    It is located on the road going from Grikos to Chora.   *Traditional entertainment and local patmian dishes. 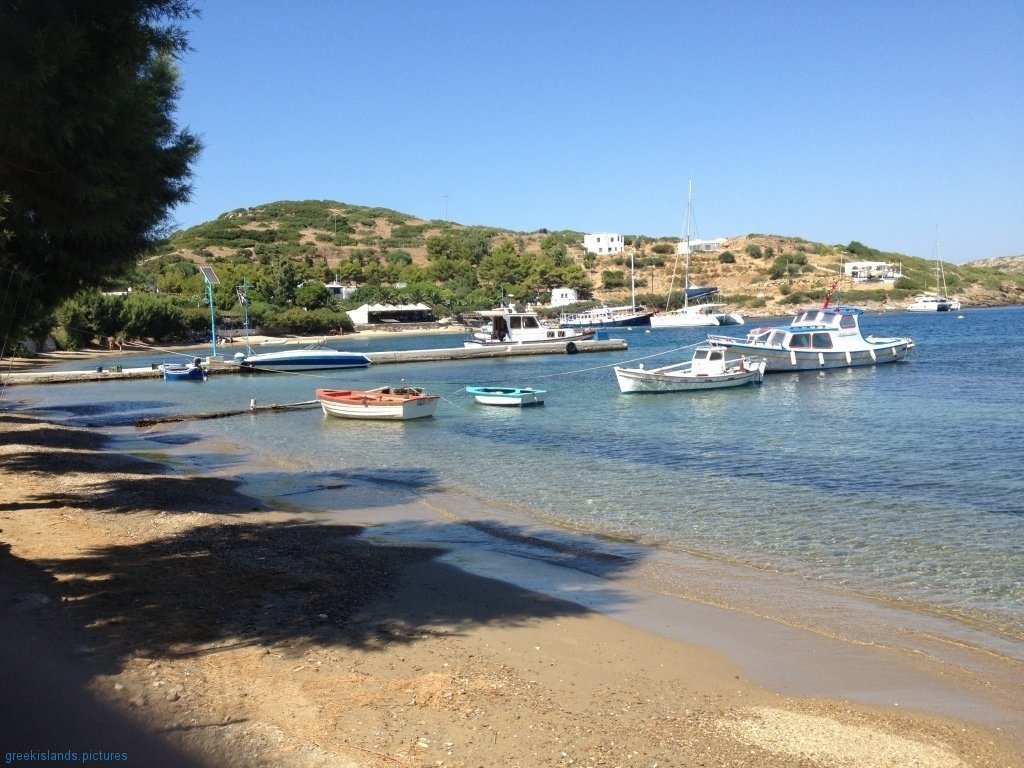 You may go for a swim in Agriolivadi, an organized beach. It is located 4km from Skala.  Also,  Aspri beach is a bay surrounding trees, Livadi Geranou (located on the north part of Patmos with turquoise crystal waters). Also, Psili Ammos one of the beautiful picturesque beaches of  Patmos. It is located in the southwest part of the island.  Moreover, Lampi beach is 7km from Skala. This beach is famous for the colorful pebbles.

Another beach is Sapsila. It is located between Skala and Grikos. This is the beach with the warmest sea in Patmos whereas in Vagia you will find the coldest waters of the island.   Do not forget to go to Grikos and Petra Kalikatsou beach. 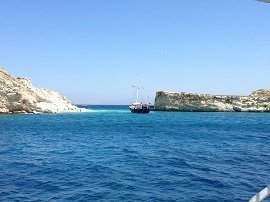 You can go by boat that leaves from Skala or Grikos and make a unique cruise with a sailboat.

Other small islands  Makronisi, Aspronisi, Tiganakia, Plati Gialos. You can visit Lipsi, an island with white houses and traditional sense. On the north side of the island, you will find the beach of Platy Gialos and Aspronisia with their white stones.

You can go on daily excursions to nearby islands such as Arki (an Aegean island with 44 inhabitants, most of them are fishermen(2011 inventory)), Marathi (a small island opposite the Αrki. The island is connected every day with boats of Patmos.