Rhodes island (Greece, Dodecanese) is one of the most popular Greek Islands located in the southeastern Aegean.  The city of Rhodes with its landmark the Knight’s castle is both its capital and the largest settlement.

Each year the island is overwhelmed by thousands of tourists visiting it to enjoy the sea, nature, and sightseeing.

The Colossus of Rhodes is considered as one of the Seven Wonders of the ancient world. It was a huge statue that depicted the god Apollo. He was raised by Haris the Lindy pupil of Lysippus in the 3rd century BC. The Statue of Liberty in New York was about the same size as the Colossus of Rhodes, although it was based on a higher base. The face of the statue is said to be distinguished from the entrance of the port of Rhodes.

The statue was an intelligent “advertising” of the city that raised it, a tangible proof of its wealth and technology. Unfortunately, however, in 222 BC, about 60 years after the unveiling, the Colossus collapsed as its knees were crashed by an earthquake. Despite his terrible fall, the statue did not cease to belong to the great wonders of the world.

Within the walls of the Old City, there are remarkable monuments from the Byzantine era, the Ottoman domination and the period of the Italian occupation, with the majestic palace of the Grand Master.

Within the limits of the city of Rhodes lies the Medieval Town of Rhodes or the Old City, as it is called by the locals, one of the best preserved medieval cities in the world, recognized since 1988 as a UNESCO World Heritage Site.

The Archaeological Museum of Rhodes is housed in medieval Gothic rhythm with a Renaissance building of the Knights Hospital, a building that began to build on the ruins of a Roman building in 1440 by the great magistrate De Lastic and fifty years later the great Pierre d ‘ D’Aubusson (1489).

The Acropolis of Lindos

The Acropolis of Lindos is an archaeological site built on a cliff of 116 meters high, dominating over the traditional settlement of Lindos in Rhodes. Lindos has archaeological findings from the archaic period and later, as well as building activity dating back to the time of the Knights Temple (14th-16th c.). This rich history, coupled with the unique beauty, natural view of the site, makes the acropolis of Lindos one of the most popular archaeological sites in Greece, as it is ranked third in the number of visitors.

The Grand Master’s Palace is a 14th-century building built by the Knights of St. John, who owned Rhodes and some other islands. According to recent researches in this place, there was the sanctuary of the god Helios, and in this position probably the famous Colossus of Rhodes had been set up, as opposed to the earlier belief that it was in Mandraki, one of the three port of Rhodes. The palace, apart from the administrative center of the Knights and the residence of the Grand Master, was also home to the ruling social and intellectual class of Rhodes.

Kamiros is an ancient city on the island of Rhodes in the Dodecanese. It is located 30 km northwest coast of the island and three kilometers west of the village of Kalavarda. Kamiros is one of the three ancient cities of ancient Rhodes, along with Ialyssos and Lindos. 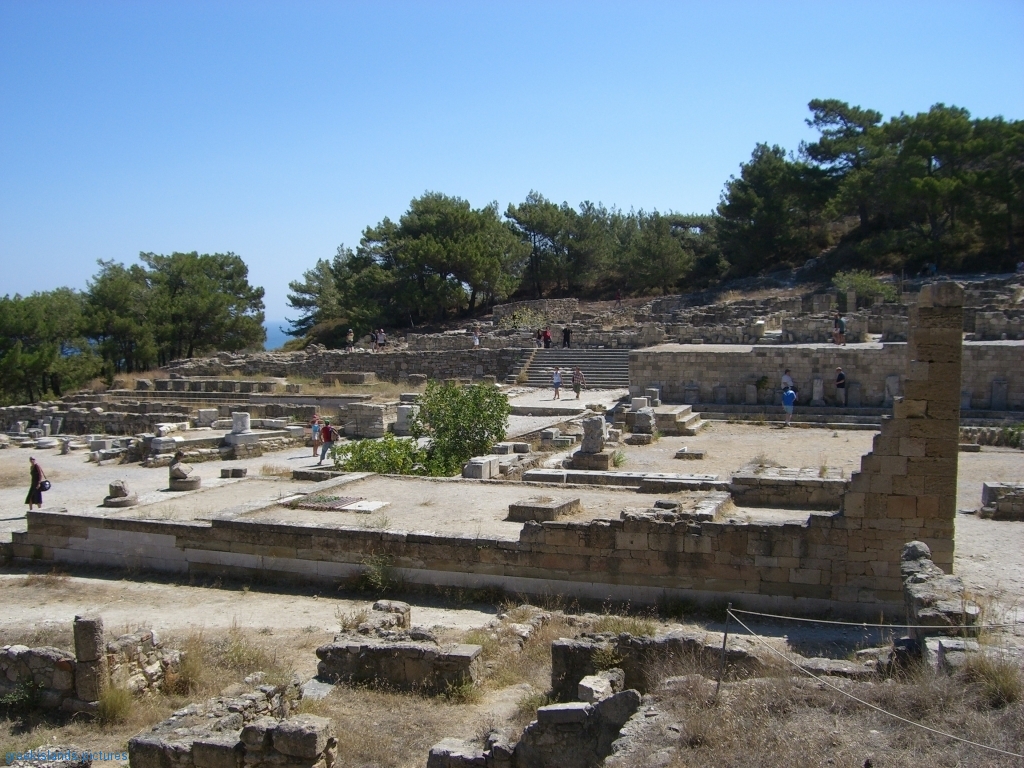 It is built amphitheatrically on a hillside overlooking the sea. In the archaeological site are preserved the ruins of the Hellenistic-Roman city of Kamiros. They came to light in excavations of the 19th century and especially during the period 1912-1943. 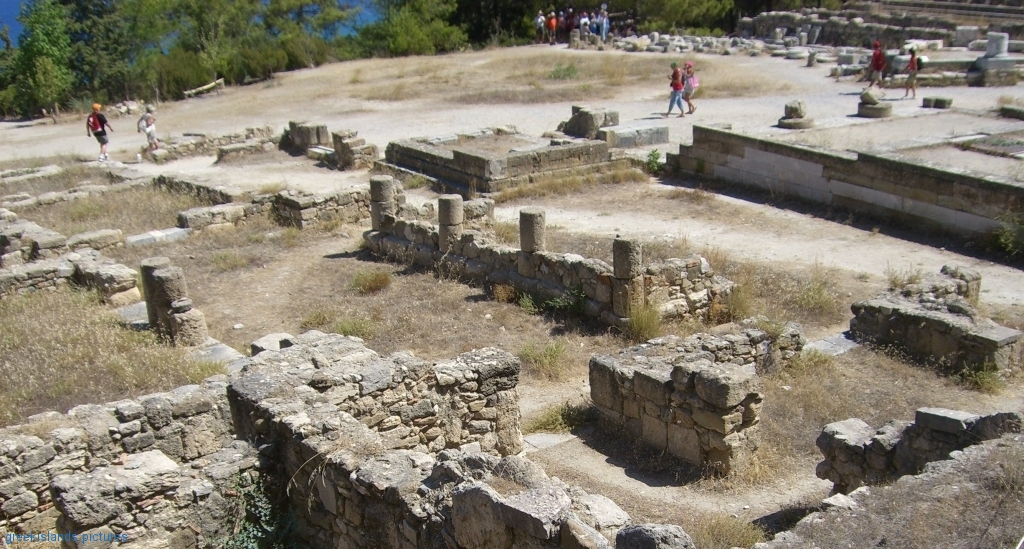 Τhe visitor will see ruins from the ancient Agora, from the aqueduct, from the Temple of Athena, etc. 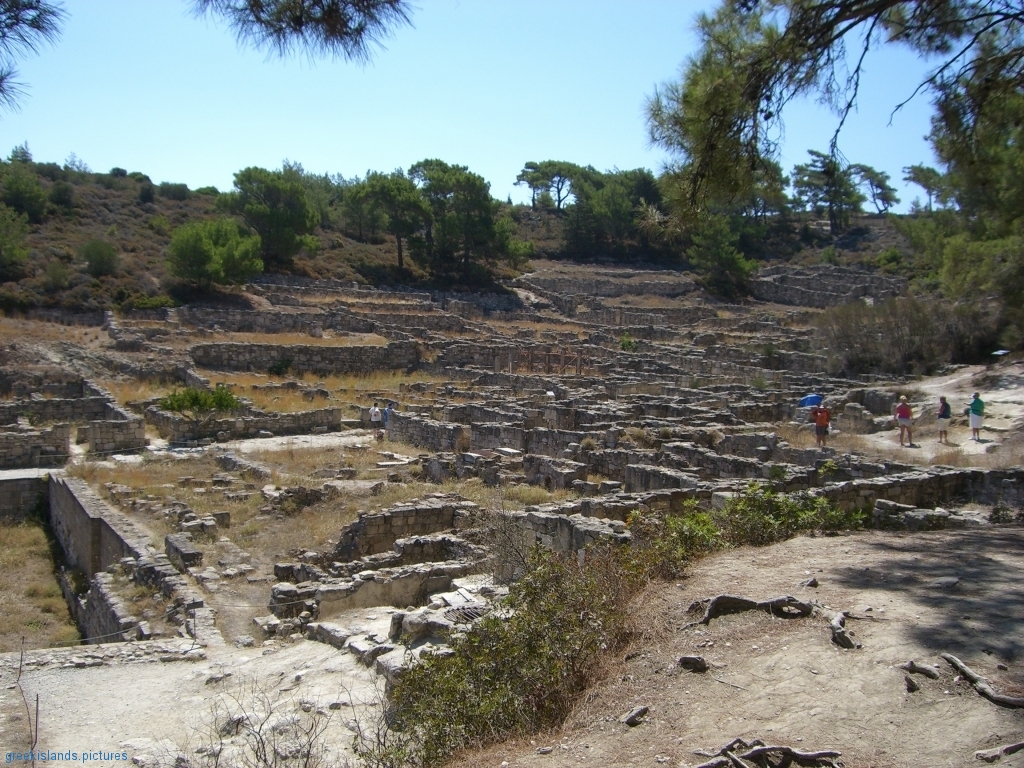 One of Europe’s most rare habitats is the Butterfly Valley. It is located between the villages of Paradisi and Theologos.  It is a biotope, a unique natural park, with lush vegetation of pine trees, plane trees that hosts the “Panaxia quandri-punctaria” (a very rare species) butterfly, which occurs from mid-June to late September. 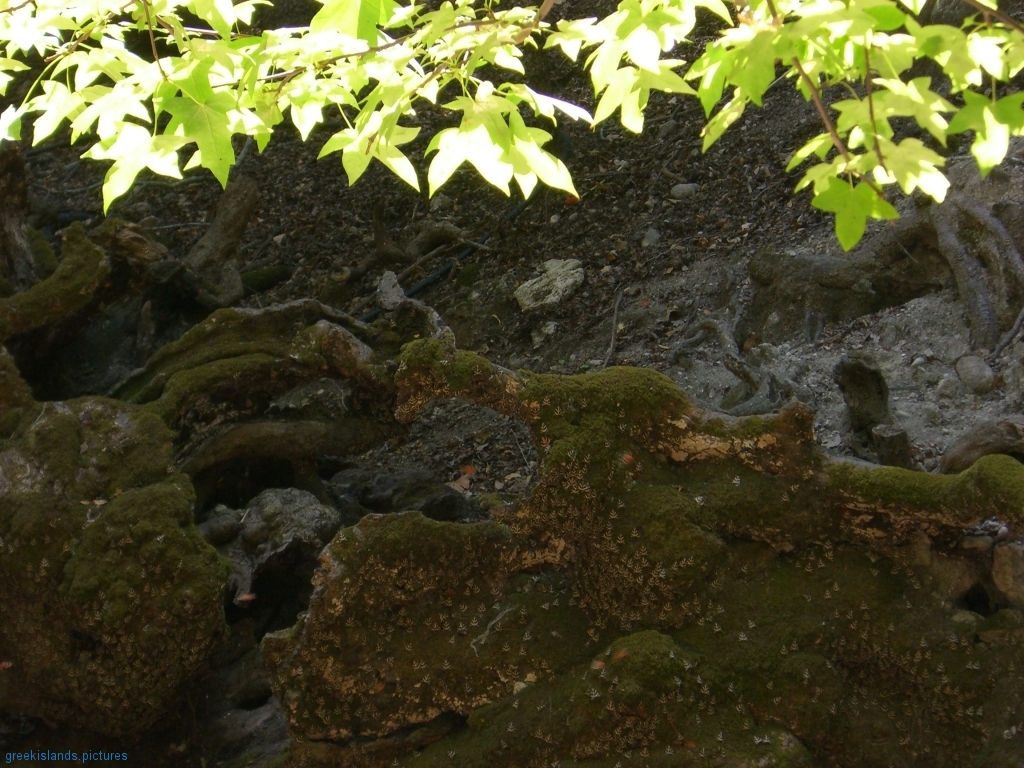 In the same area, there is a museum that includes the exhibition of butterflies as well as samples of flora and fauna of the unique habitat.

The Aquarium-Hydrobiological Station of Rhodes is located to the northernmost edge of the island and was founded at the Cape of the Windmills during 1934-1936. The Ministry of Culture has declared the station’s building as a historic heritage monument.  In the visiting area of the Aquarium, the corridor architecture, made of porous stones and decorated with natural shrubs, depicts an underwater sea cave. As well as the distinctive decoration of the floor with patterns of marine organisms made of white and black gravel.

Holy Church of the Assumption of the Virgin

In the town of Kremasti, which is one of the largest settlements on the island, there is the Holy Church of the Assumption of the Virgin, in which the miraculous icon of the Virgin Mary is kept. It is one of the well-known places of the Rhodes, where every faithful from the Dodecanese and the rest of Greece flock to the feast every August 15th and until August 23rd.

Rhodes is famous for its amazing beaches with sand or pebbles. 26 km South of  Rhodes town is the well-known beach of Tsampika. It is under the cliff overlooking the famous monastery of Panagia Tsambika of Psili.

Also, Afantou Beach is a long and large beach.  The famous Antony Quinn beach is located 20klm south of Rhodes town near the beach of Faliraki. Also, it is worth visiting the beaches of Lindos in the picturesque village of Lindos and Gennadi with the sand dunes. Kalithea beach is famous for its hot medicinal springs.

South of the Rhodes island are the beaches of Kiotari, the popular Glystra Beach, the Pefki and at the far south is Prasonisi, a favorite destination of the windsurfers. 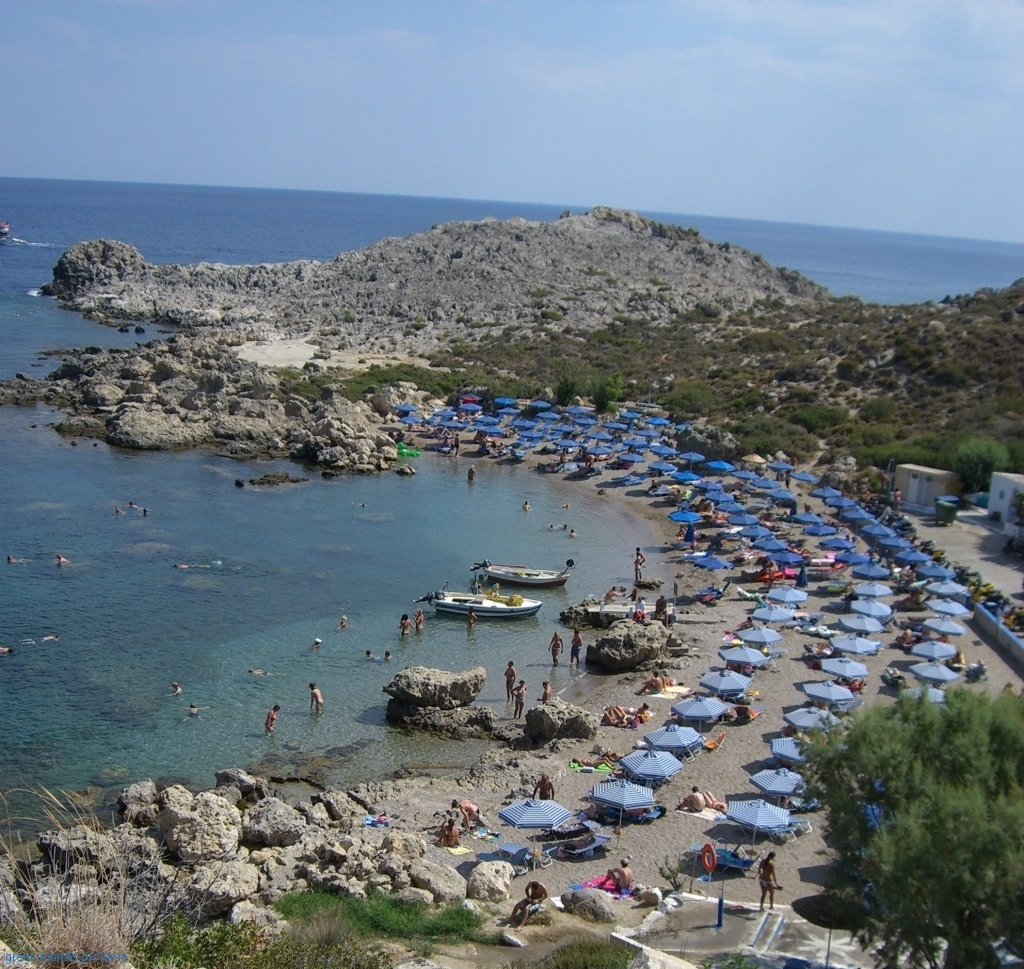 Prasonisi Beach is one of the most spectacular beaches.  It is long and large sandy beach and lies 85 km south of Rhodes town. On the left side of the entrance, the sea is calm, while on the right side wind blows. The area is ideal for swimming, windsurfing, and other similar sports while allowing for free camping. Prasonisi is a geological formation that looks like a small island, southwest of Rhodes. 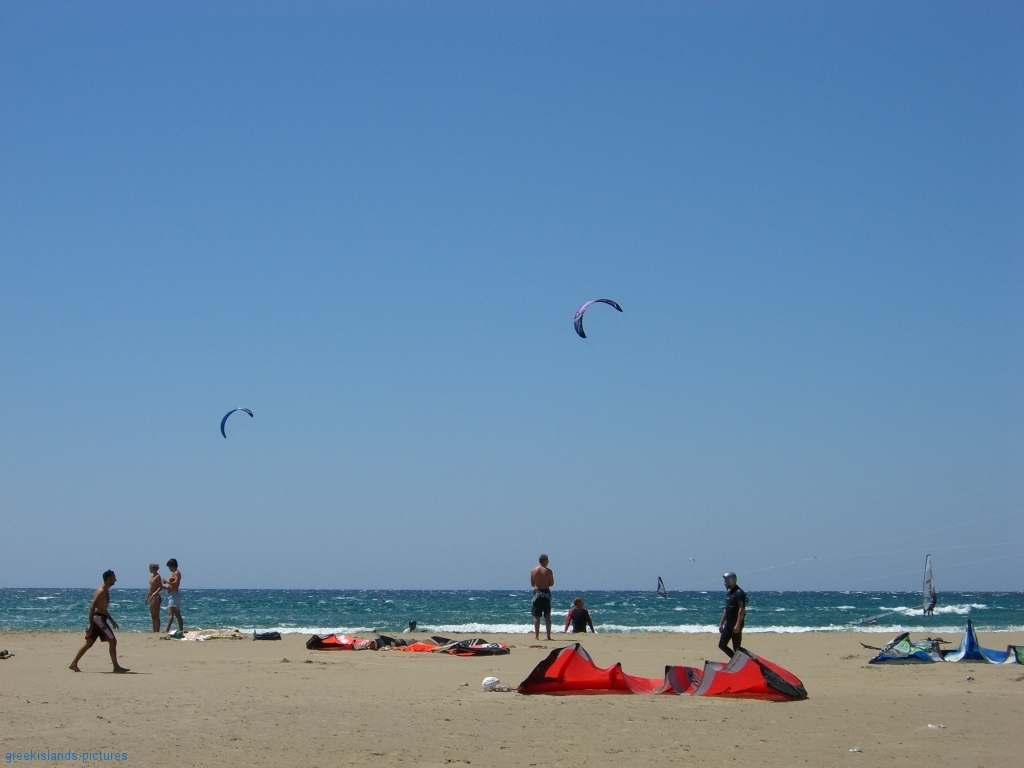 Do not miss the opportunity to take a day cruise to Symi. Symi is located north of Rhodes and is the most picturesque of the Dodecanese islets. After a two-hour cruise, you will discover an island under the protection of Unesco, all the houses are built and restored with the same architecture and painted in different colors. Rhodes day trip to Symi also makes a stop in Panormitis, a small port on the southern side of the island where the great monastery of Panormitis is located. It is dedicated to Archangel Michael and is a very important point of pilgrimage to the Greek people.

Halki belongs to the Dodecanese, about an hour’s boat trip from Rhodes. Halki is a beautiful small island with colorful houses scattered around a picturesque harbor. 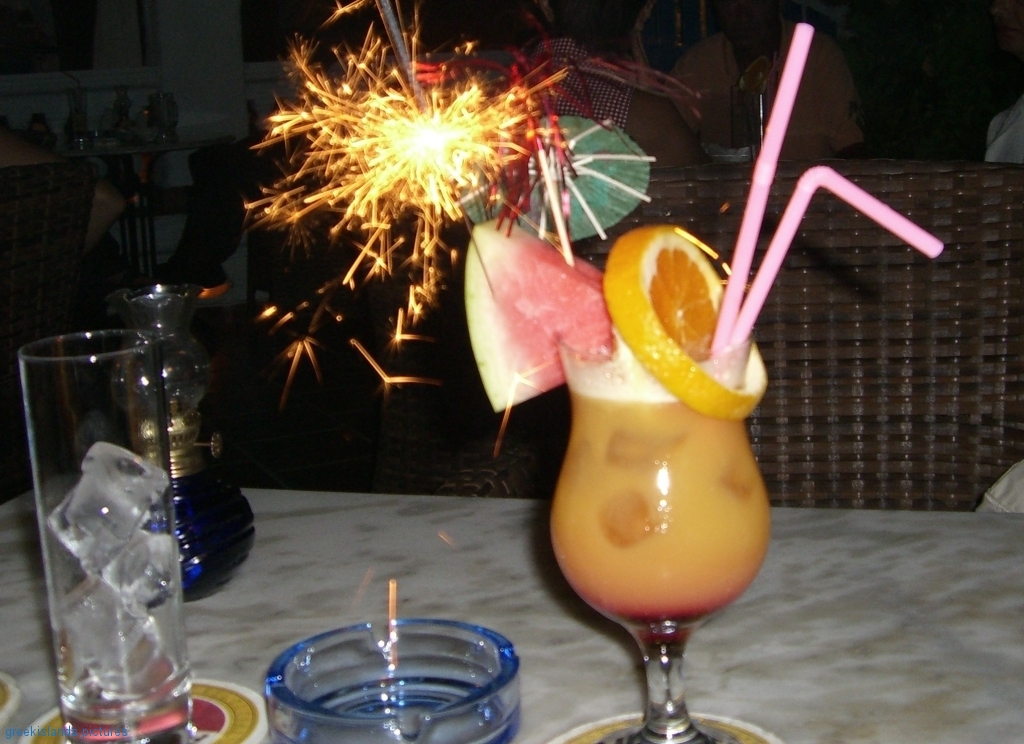 It is worth tasting the traditional sweet ” melekouni”. It is the typical sweet of the Dodecanese with sesame seeds, almonds, herbs, and honey.

Another sweet delicacy is “takakia”. It is confectionery made with traditional leaf, with nut filling and honey syrup.