Corfu is one of the most important islands of Greece in the Ionian Sea, one of the first Greek islands that accommodated mass tourism.   Its southern part, unknown for most of its visitors, hides unexplored treasures, pristine villages, and natural beaches.
The city of Corfu is characterized by a strong Venetian element and many English and French influences. Corfu is a cosmopolitan city that spreads a sense of nobility.   In Corfu city, many Venetian mansions and buildings are painted with the ochre’s traditional earthy color. 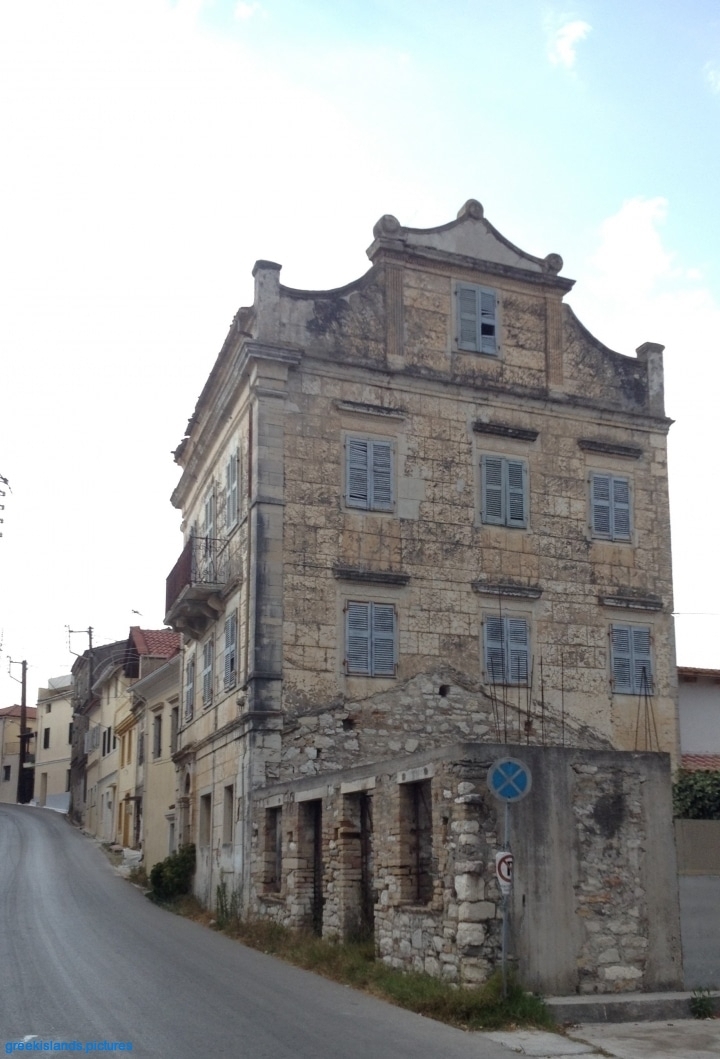 Maybe the city of Corfu carries the Venetian grace. Simultaneously, the Middle Corfu takes pride in its sights and beaches. The North for the green of valleys with running waters,  Southern Corfu, has sui generis character, with cedar trees. The largest sandy beaches you will come across on the island.  Such are its peculiarities that you would hardly guess that you are in Corfu.

Far away from the commercialization and touristic hype of the rest of the island, life is flowing slowly here, to the endless vineyards, the dunes and the cedar of Lake Korissia, the forest of Arkoudila, the lighthouse and the salt marshes dated to the 15th century in the homonym cape. 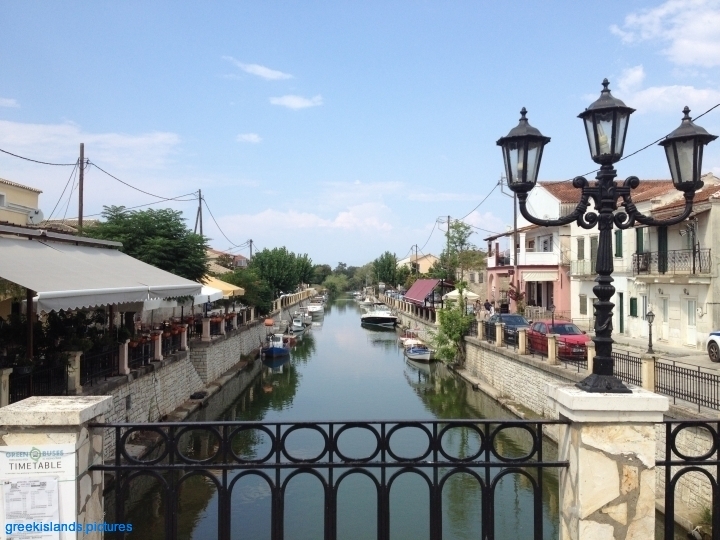 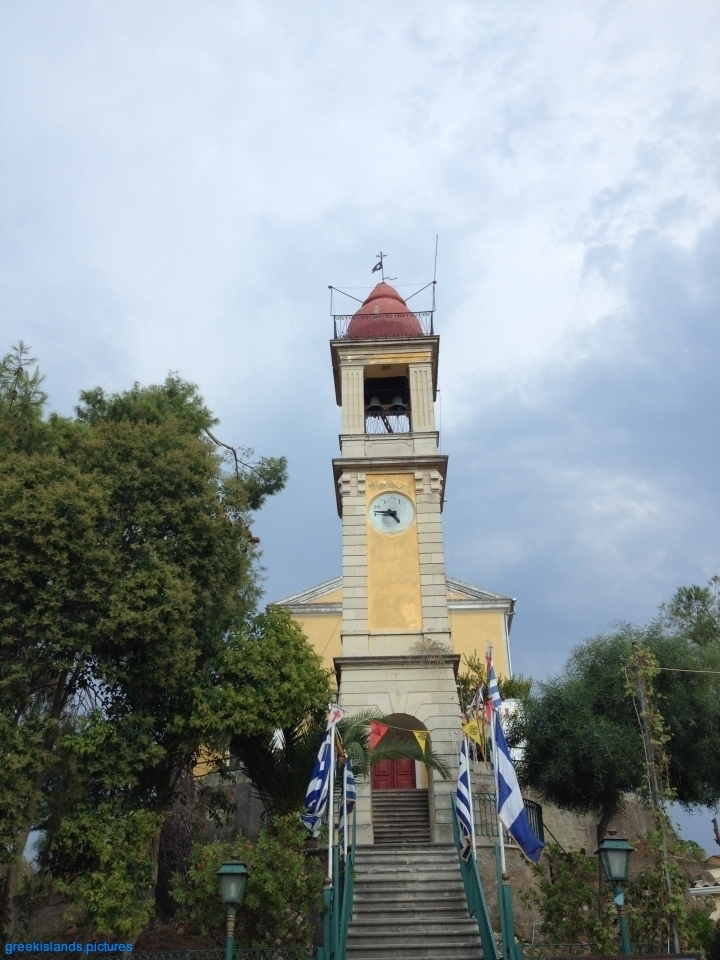 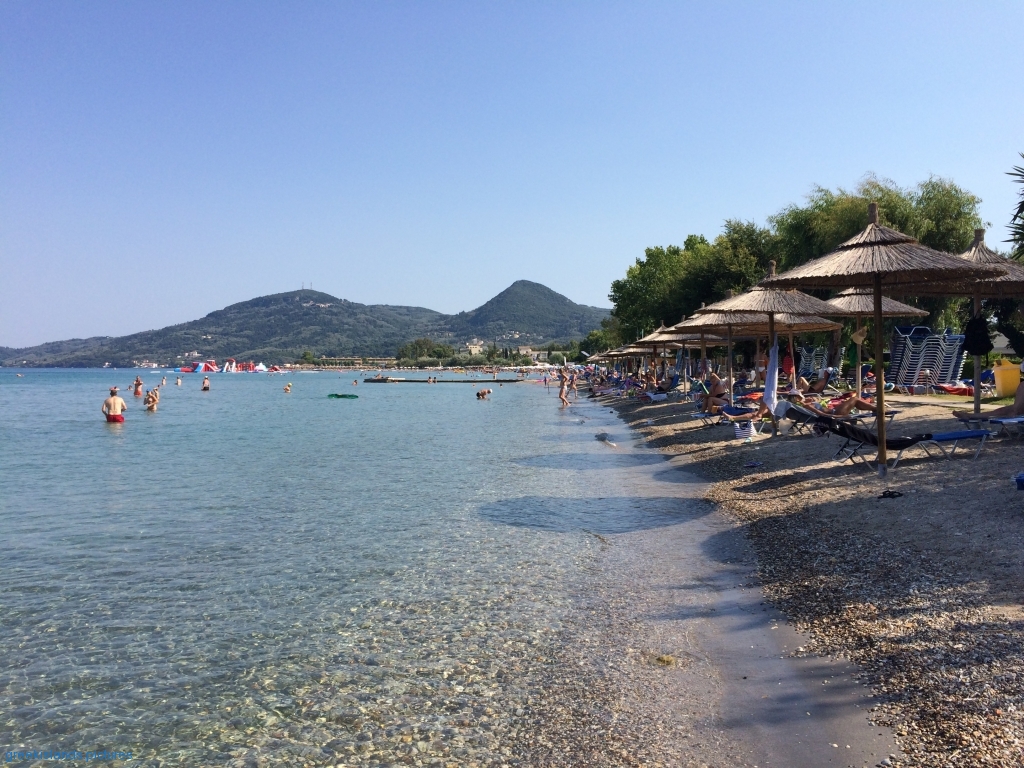 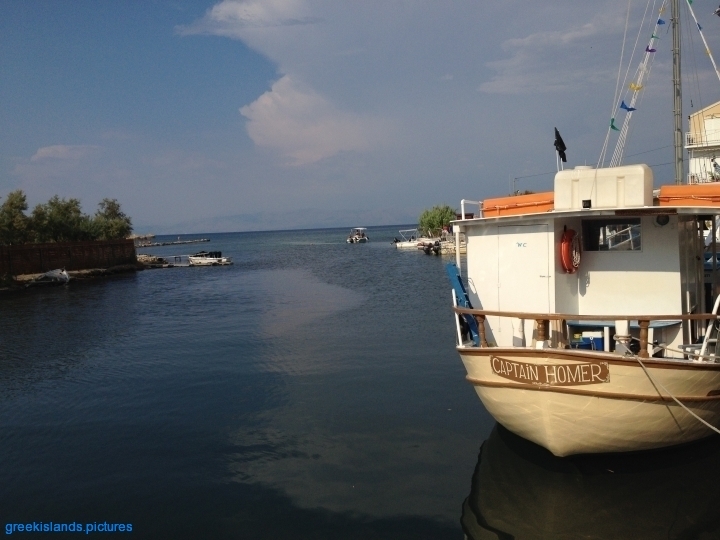 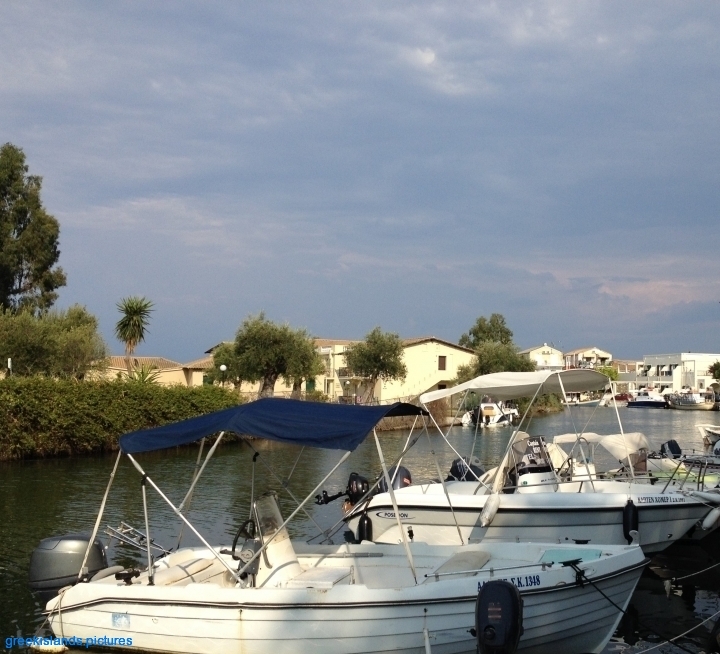 Corfu is often called the “queen” of the Ionian. No matter how many times you visit it, you will always have something new to see from the noble Corfu.

Corfu Shell Museum in Bernitses –The beautiful world of the deep 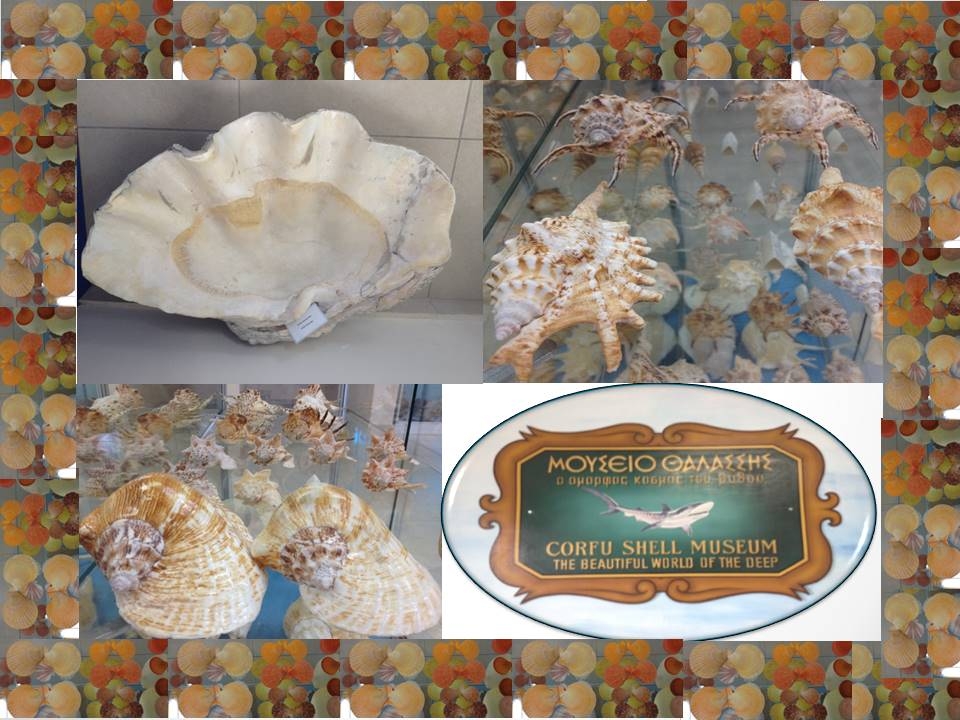 The Corfu Shell Museum is a private initiative of the diver and collector Mr. Napoleon Sagias.  He lived in Australia, and shell collection was his hobby. He traveled with his team to the Indian and the Pacific Ocean, diving and collecting mainly shells. 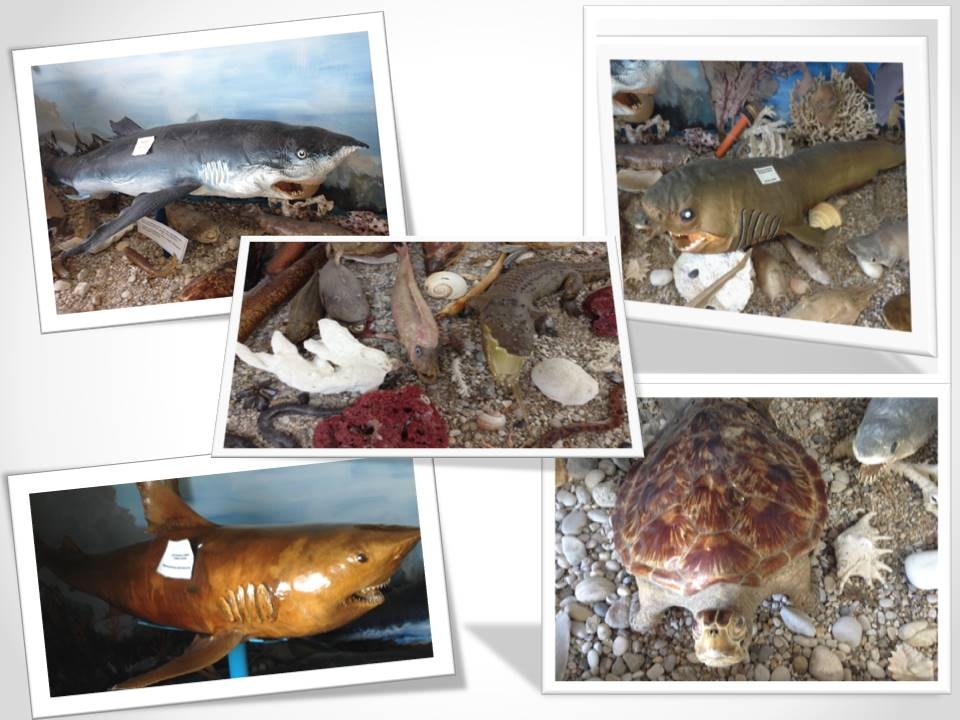 The museum contains many thousands of impressive and rare species worldwide and possesses one of the biggest and most complete shell collections in Europe.

It contains shells, fossils, sponges, corals, stuffed fish, sharks and shark teeth, lobsters, crabs, sea urchins, snakes, and more from the Indian and the Pacific Ocean and also from the Mediterranean Sea. 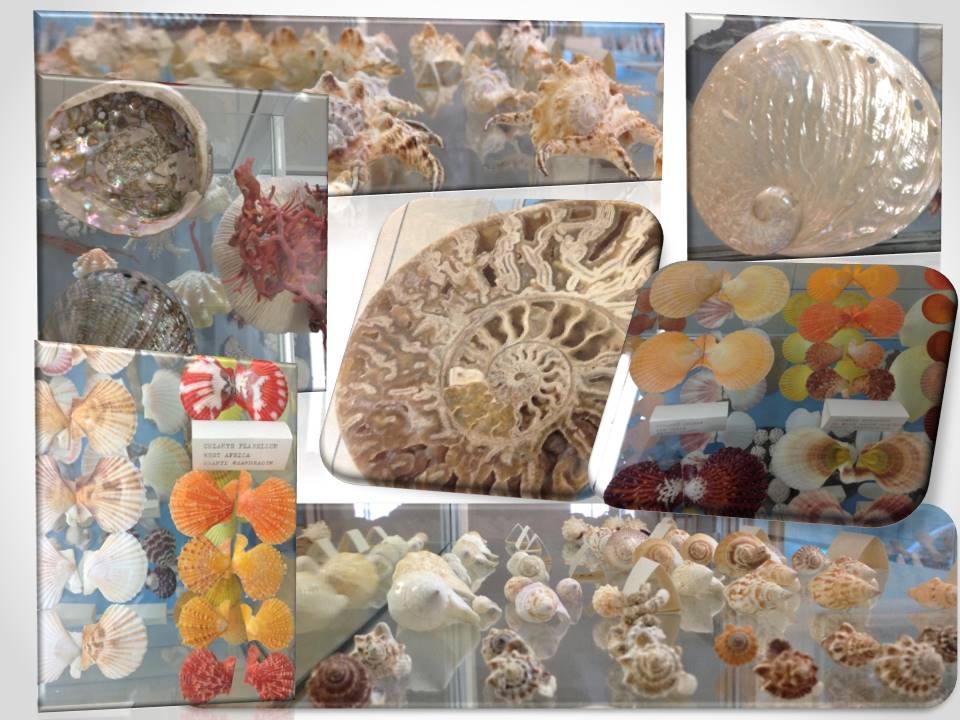 Corfu From Wikipedia, the free encyclopedia

Gardiki Castle is a 13th-century Byzantine castle on the southwestern coast of Corfu and the only surviving medieval fortress on the southern part of the island.

The castle dates from the thirteenth century and is located on a low hill near Agios Matthaios, situated at a higher elevation. The ruler responsible for the construction of the castle is not known. Still, it is assumed that it was built either by Michael I Komninos or his son Michael II Komninos, rulers of the Despotate of Epirus.

The castle’s remains are from the upper Paleolithic era, dating from 20,000 B.C. when Corfu was still united to the mainland region of Epirus, were found on the site of the castle at the rock shelter of Grava Gardikiou, including hunter-gatherer stone tools and animal bones, which have since been removed and are exhibited at the Archaeological Museum of Corfu.

The location of Gardiki at the narrow southwest flank of Corfu protected the fields and the southern lowlands of Corfu and in combination with Kassiopi Castle on the northeastern coast of the island and Byzantine Angelokastro protecting the northwestern shore of Corfu, formed a triangular line of defense which protected Corfu during the defenseman era.

Agios Gordios is one of the most popular sandy beaches in Corfu. It took its name from the homonymous church of Agios Gordios, built on the beach in the center of the beach. 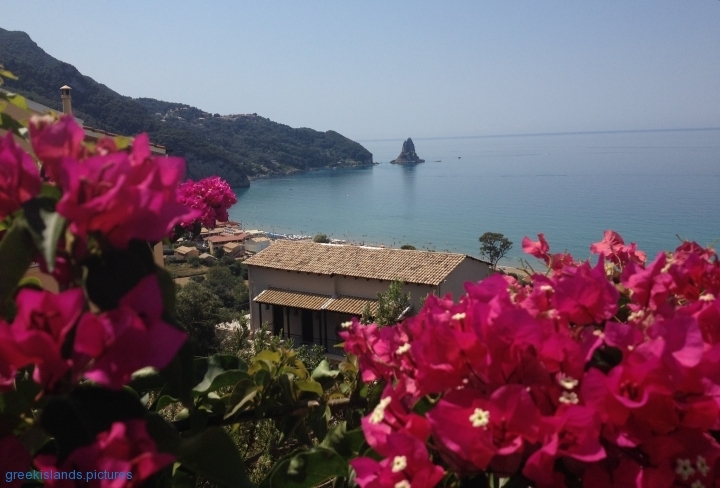 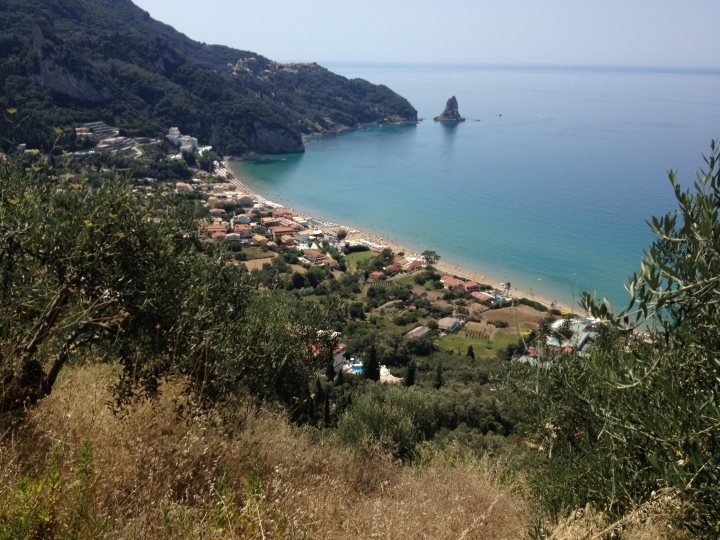 It is about 40 minutes drive from the city center of Korfu and a 20-minute drive from Benitses. It is located next to Korission Lagoon, an area of 6,000 acres, an important protected wetland (Natura area),  and a pole of attraction for 126 bird species. 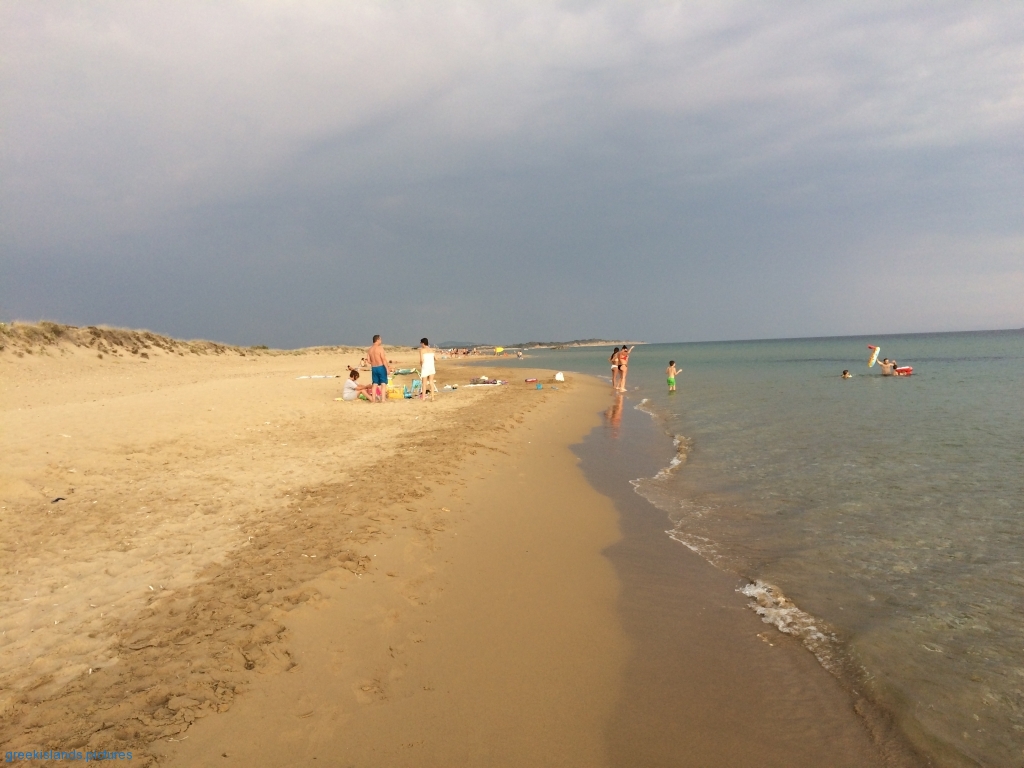 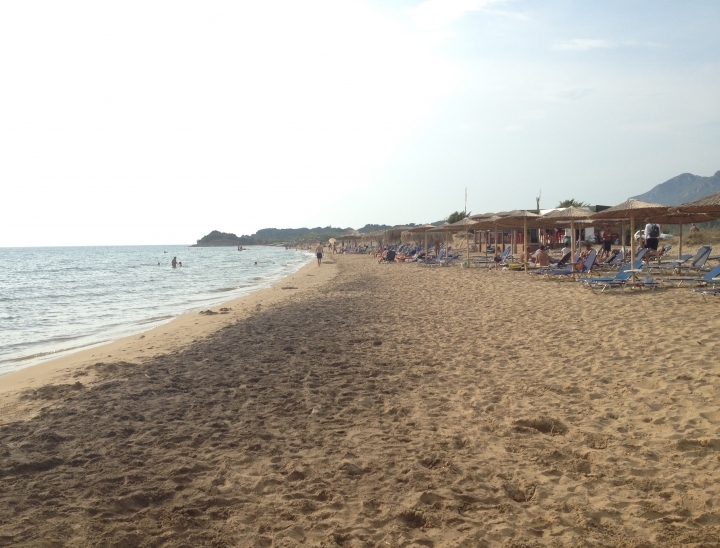 The Halikounas beach offers many kilometers of sandy beach, about 3klm, and it is the largest beach of Corfu with shallow waters, fine sand on the Ionian side, and warm waters. 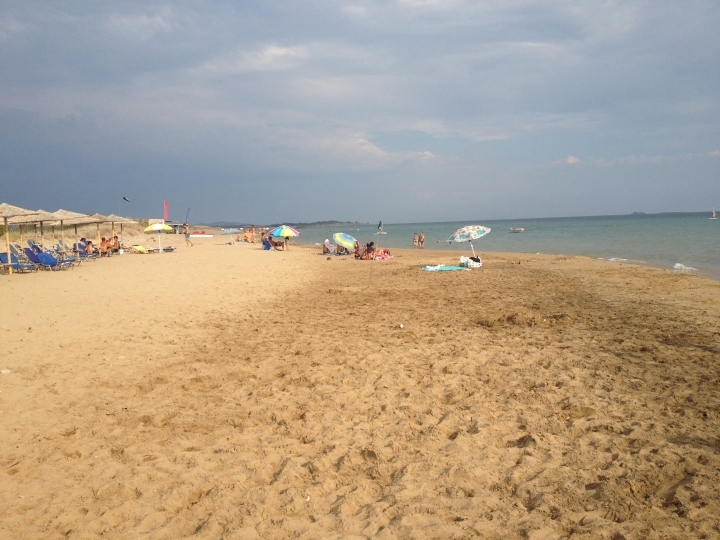 It is a favorite choice of windsurfers and kitesurfers, as the winds blowing on this coast is appropriate for particular water sports. Also, it is ideal for families with young children. 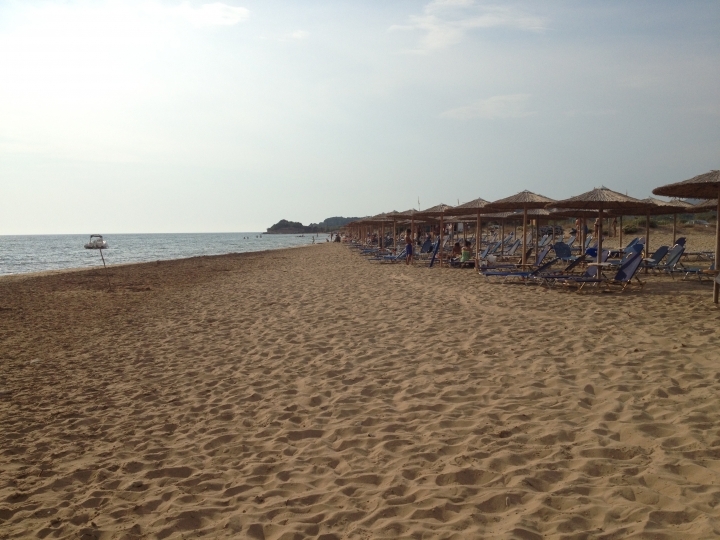 Alykes Lefkimmi consists of a peninsula of about 2000 acres in the southern part of Corfu and north of the town of Lefkimmi. 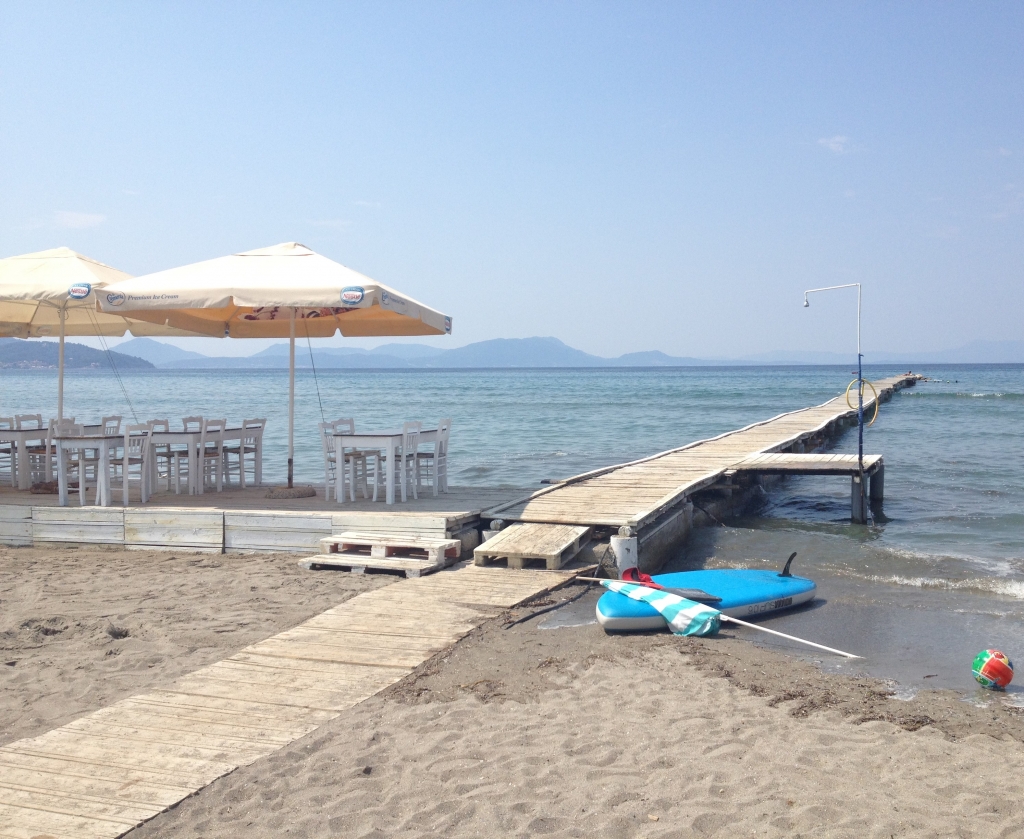 The beach stretches about 0.5 km and has also been awarded the Blue Flag, certifying its excellent waters. 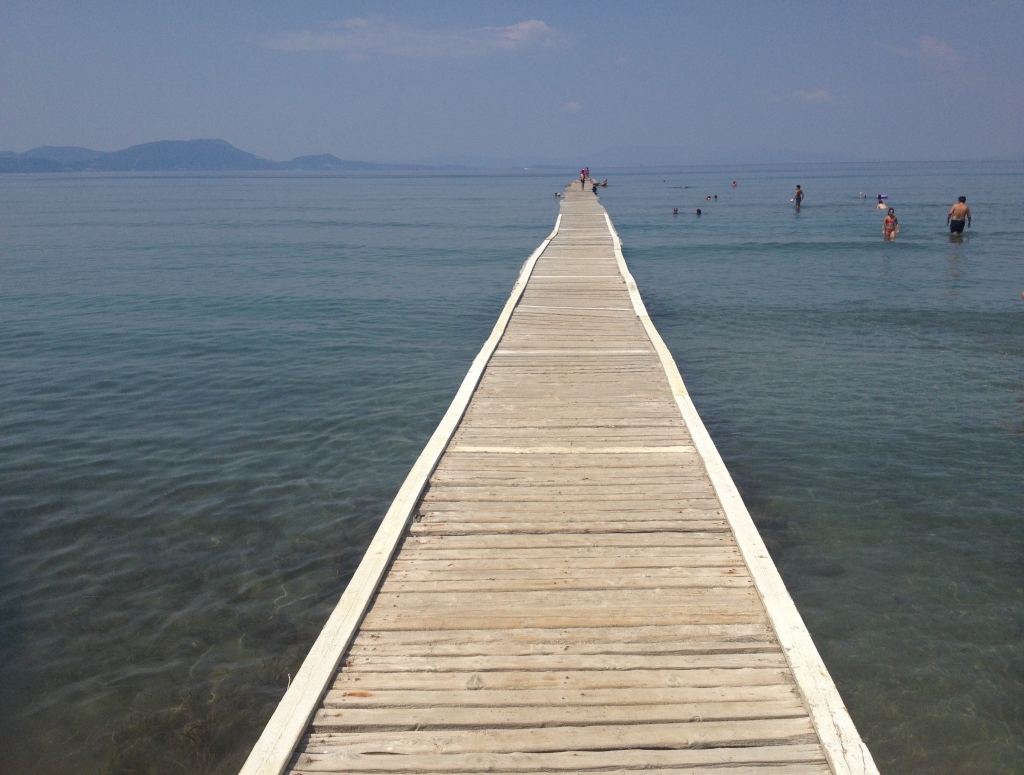 Alykes in Lefkimmi is one of the most important wetlands on the island. 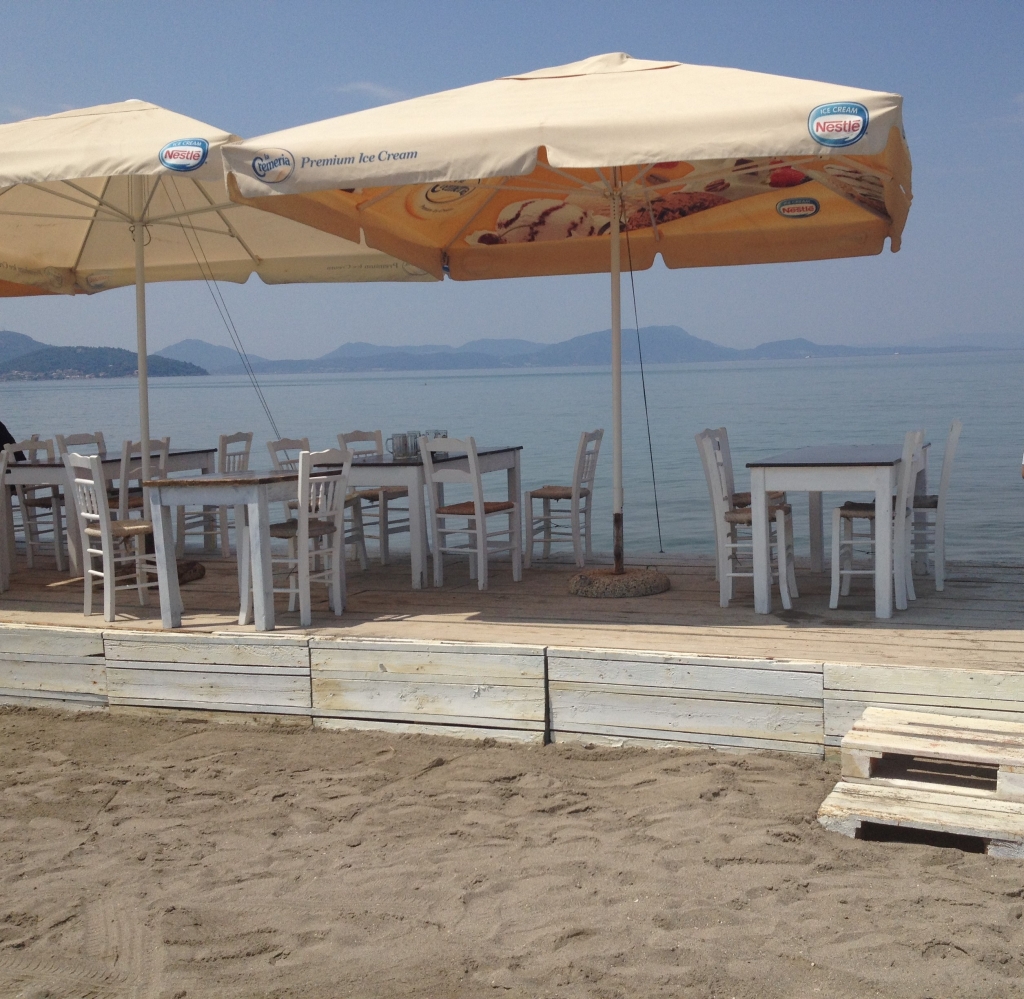 Kavos is located at the southernmost edge of the island of Corfu, in the wider area of Lefkimmi. It is located 45 km from Corfu and is the busiest tourist destination on the island.

The long, sandy beach is approximately 2 km and has shallow and cold waters due to the open sea and some streams. It is organized with bars, restaurants, sun loungers, umbrellas, and plenty of water sports.

The Moraitika beach is located 24 km from Corfu town in the southeastern part of the island.  Its beach is sandy with crystal clear waters combined with small pebbles. 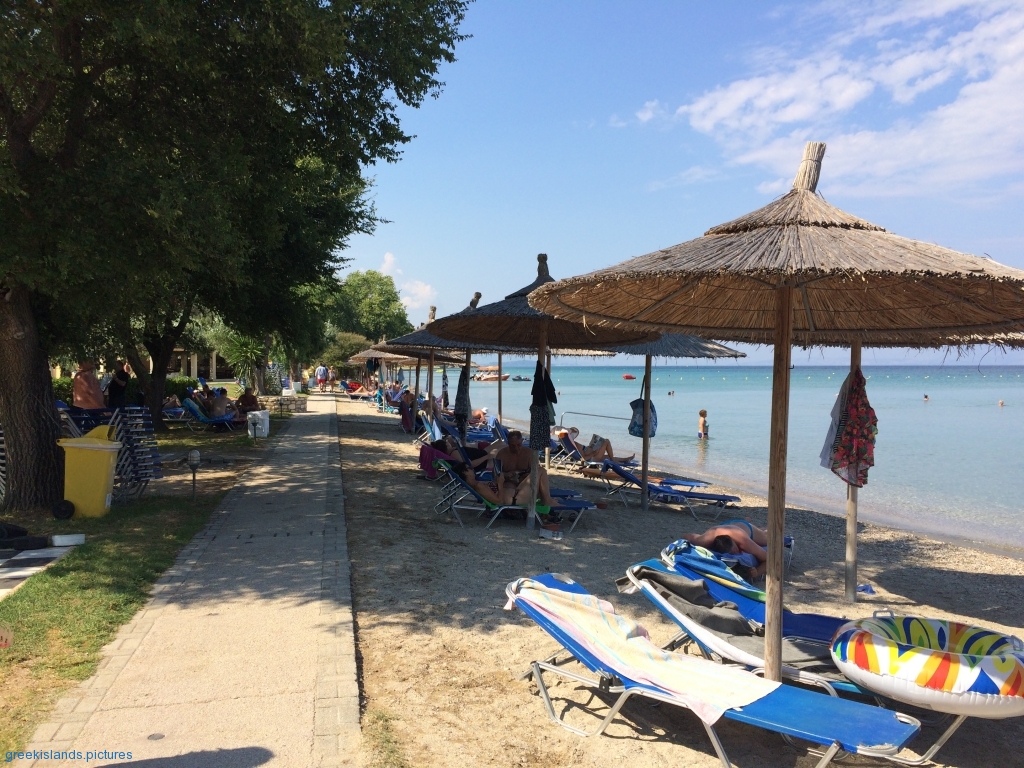 Benitses village is located very close to the city of Corfu (just 12 km). It features clean, blue-flagged beaches of pebbles and sand with crystal clear waters, offering sun loungers, amenities, and plenty of water sports. The European Union awarded the Blue Flag to the beach, making Benitses an ideal place for swimming, sailing, and sea sports.

Things to do -Activities

City Sightseeing tour of Corfu offers a perfect way to see the sights and sounds of the City. The visitor will hear Corfu’s history and experience the famous sights and monuments with an open double-decker bus.

Make a boat trip to romantic Parga on the Greek mainland or the picturesque fishing village called Syvota.

Moreover, visitors may have a unique opportunity to discover the rare beauty of the islands Paxos and Antipaxos, which are situated only 8 nautical miles away from Corfu.  The cruise departs from Benitses- Lefkimmi or Kavos port.

Another choice is an excursion to Blue Lagoon. This cruise is a trip to the bluest coasts of continental Greece. The visitor will see the historical caves of Papanikolis,  swim under the sunset in the Blue Lagoon beach, and the unique beach of Agia Paraskevi.

Corfu has an international airport and has regular ferry services from Igoumenitsa to Corfu Town. From Igoumenitsa port, there is also a smaller ferry route to Southern Corfu (Lefkimi).

Tasting the local, traditional dishes of Corfu cuisine such as pastitsada (Greek: Παστιτσάδα). It is a traditional Sunday dinner and sometimes called pastitsada Korfiatiki. The main ingredients are meat and thick spaghetti. In the villages of Corfu, the housewives use cinnamon in their cooking.

Sofrito is a traditional food of Corfu and is one of the most famous and classic dishes of the island, along with the pastitsada and the bourdeto. The name of the dish comes from the Italian Sofritto, which means a mild word that existed during the Venetian domination. The locals use beef sliced, fried in oil, and simmering with three ingredients that create a balance of tension between them (vinegar, garlic, parsley), often together with white wine. They serve it hot with rice or fries and frozen dry white wine.

Bourdeto is a rather thick, fishy soup, mainly found in the Ionian Islands, considered the traditional and most characteristic dish of Corfu. Its origin and name come from Italy – brodetto in Italian means broth. The locals make Bourdeto with various fish species (cod, octopus, scorpions, galleys, cephalopods, paraglides, etc.)

The sun rises in the sky of the beautiful Ionian island of  Corfu. We are going to share more experiences and photo memories from our next trip… 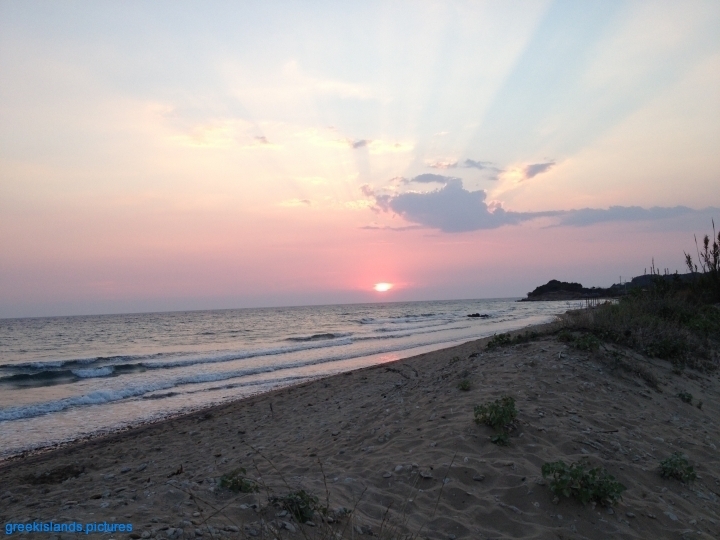